All I Have To Do Is Dream 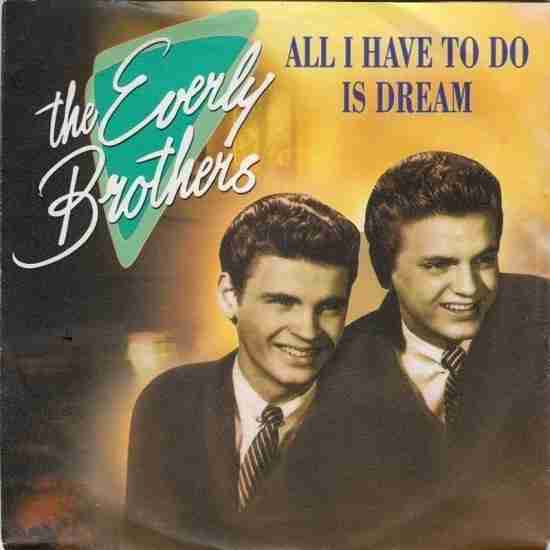 
The Everly Brothers first string of hits (this includes “Wake Up Little Susie”) were written by the husband and wife duo of Felice and Boudleaux Bryant, who had been writing hits for country artists since the late 1940’s, but it was the collaboration with the Everlys that really put them on the map. Incidentally, Don Everly was first signed as a songwriter, but the Bryant’s songs worked so well with the Everlys harmonies that to this day you can imagine anyone else singing those songs. Bluntly, nobody else should even try.[1]

With “All I Have To Do Is Dream”, the song’s origins come from their own lives, when Felice was working as an elevator steward in Milwaukee and saw Boudleaux, who with the exception of having a beard resembled the man that she had been dreaming about since she was eight years old. Five days after the two ran off together and as corny as it sounds, they would make beautiful music together.[2]

The partnership with the Everlys and an inspiration from an eight year’s old dream, gave all parties what may have been the most beautiful song of their career. “All I Have To Do Is Dream” was elegant and made perfect use of the talents of the Everly Brothers and avoided the schmaltz that some love songs of that era and this one travel to.

The association between the brothers and the husband and wife team would also give us the hits “Bye Bye Love and Bird Dog”, and the Bryant’s also wrote the following songs:

“Rocky Top”, a Tennessee anthem that never went in any version to the top twenty but is well known in the south especially at the University of Tennessee where it has been adopted as their unofficial fight song.

“Raining In My Heart”, a minor hit for Buddy Holly.

“Love Hurts”, originally done by the Everlys, but became a signature song for the Hard Rock band, Nazareth.

The estimated total of sales for the Bryants were 300 million records. Think about that next time you have a chance meeting in an elevator.