On a recent TSN periscope chat with former multi-time WWE Heavyweight Champion, Bret Hart, a lot of candid comments were made, which included his opinions on his youngest brother, Owen Hart and the fact that he is not in the WWE Hall of Fame.

I’m hoping next year at WrestleMania that he’ll be inducted and I’ll be really sorely disappointed if he’s not. It’s really overdue.”

Many have speculated that the omission of Owen to the Hall is largely due t his widow, Martha, who has been very vocal about her dislike of the WWE and has previously been in multiple litigations with the “E”.  Bret did not allude to this but did discuss how they had to tiptoe around her in the creation of the upcoming Owen Hart DVD and that she has made a fool out of herself in regards to trying to obliterate the legacy of Owen Hart in the WWE.

Bret would add that if Owen does not go into the WWE Hall of Fame next year, he won’t attend another one until the tag team of he and Jim “The Anvil” Neidhart were selected.

He would go on to add that he would like to see his fellow Hart Foundation faction members, The British Bulldog and Brian Pillman in, as well as former Tag Team Champions, Demolition.

Could Bret influence the powers that be (namely Vince McMahon) that an induction for Owen should happen next year?  Considering the scandals involving Jimmy Snuka and Hulk Hogan that have taken place recently, it might be prudent not to rehash a dark day in wrestling history, even though the resume of Owen Hart shows he belongs and frankly would make us very happy. 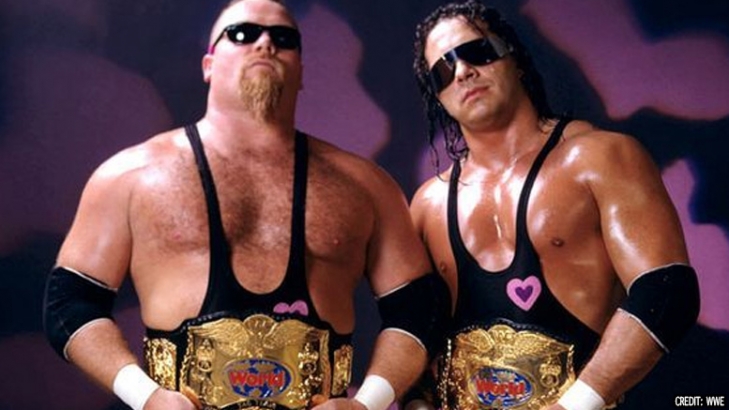 The WWE has announced that the Hart Foundation (Bret “Hit Man” Hart & Jim “The Anvil” Neidhart) will be inducted into their Hall of Fame.  This has been speculated over the last month and it was made official today.

Both Hart and Neidhart joined the World Wrestling Federation in 1985 as part of the deal where Vince McMahon bought out Stampede Wrestling.  They were not paired together when they arrived as Neidhart was put with Mr. Fuji as his manager and Bret was a babyface character but within a few months they were a heel duo under the management of Jimmy Hart.

The tandem would regular have the best matches on the card and they were usually competing against The British Bulldogs or The Killer Bees.  At Wrestlemania 2 they were the last two in the ring left with Andre the Giant (who won) in the 20 man Battle Royal and in January of 1986 they would defeat the British Bulldogs for the WWF World Tag Team Titles, which they would hold for eight months until they lost them to Strike Force (Rick Martel and Tom Zenk). Following Wrestlemania IV they would compete in singles as often as they teamed together and they turned babyface. At Wrestlemania VI they beat the Bolsheviks in under a minute and they would chase Demolition for the Tag Team Titles and would defeat them for the Championship at Summer Slam 1990.  This would last until Wrestlemania VII where they lost to the Nasty Boys.  Following this loss, the tag team would amicably disband with Bret going on to become a multi-time singles champion.

We here at Notinhalloffame.com would like to congratulate the Hart Foundation on becoming the lastest members of the WWE Hall of Fame.

After the infamous Montreal Screwjob, this was an induction that appeared could never happen.  But as they say, “anything can happen in wrestling”, and time appeared to heal the deepest of wounds.  Bret “Hit Man” Hart would become a five time WWE World Heavyweight Champion and the greatest technician of his day.  He was an amazing in ring story teller, and his quiet brand of cool captured the imagination of fans.  As much as fans thought that Bret’s induction would never come, you can believe they are all glad that it did.