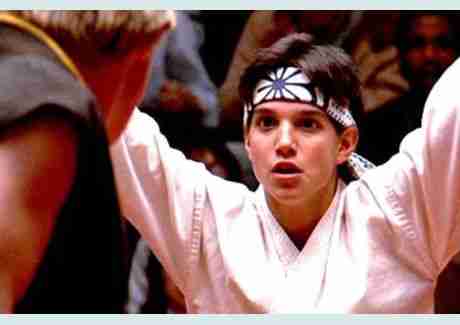 First off, let’s get something out of the way. For our purposes; the Karate Kid Remake starring Will Smith’s snotty kid never happened. With that out of the way, one of the great underdogs in sports cinema history has to be Daniel LaRusso. In the first film, LaRusso got the crap beaten out of him constantly by a group of karate fighting California teens with a merciless trainer. With the most unlikely help (the iconic Mr. Miyagi), LaRusso managed to learn the art of self defence…while learning how to paint a house.

He had the chance to face his bullies in a fair fight, the 1984 All Valley Karate Tournament, and we were treated with the best opening round wins in the perfect 80’s montage. (Come on, you were humming “You’re the Best”, right now, weren’t you?) Of course he won, even after his opponents used unscrupulous tactics (Sweep the leg!), and gave us an athletic heartwarming story.

On the flipside, let’s forget Part III, where he defended his All-Valley championship (at the age of 40 it looked like, and again he was getting the snot pounded out of him prior to) and won by doing a dance (kata) and a basic palm thrust to the chest; which won him the match but inflicted no damage to his opponent. Really lame, Daniel-San!

Why you should vote for him:
His tournament win in the first Karate Kid was seriously that memorable.

Why you should not vote for him:
His tournament win in Karate Kid Part III was the lamest in any sports film ever.