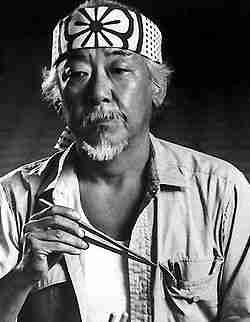 Easily the best role of Pat Morita’s career, Mr. Miyagi first met Daniel LaRusso who was a tenant along with his mother in the apartment building where he worked as the handy man.  He would impart his knowledge of karate to the transplanted kid from New Jersey by teaching him lessons via household chores such as painting wall as waxing cars, but mostly he taught how karate was to be used best as self-defence and not for personal gain.

Miyagi would not just be Daniel’s karate instructor.  He would become his friend, his father figure and mentor for life, and yes it helped get him inducted that he could probably kick everyone’s ass if provoked!

The Fictitious Athlete Hall of Fame proudly inducts Mr. Miyagi to the Contributor’s section of the Class of 2015.

More in this category: Carl Spackler »