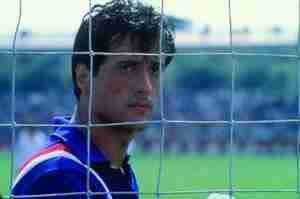 We could hear Germans watching this movie and groaning. Not because of the depiction of them as the bad guys, but by the fact that an American Goalie was could be a force in a game against them.

Sure, the United States have embraced soccer to the point where they are fringe World Cup contenders, but in 1981 the Americans had zero interest in the sport, beyond the first wave of badly coiffed soccer moms, so when you mix World War II (which Americans knew) with soccer (which Americans didn’t), you had a movie with sparse interest in North America; with the exception of fans of Sylvester Stallone, who was the aforementioned goalie.

Stallone may look like an athlete, but was awkward looking as a goalie (which at least the movie tried to explain). This isn’t “Sly’s” best performance in an athletic role, but it is not his worst, and this is a movie worth checking out on a cable rerun. This however is not the athlete we remember most from the movie as a certain Brazilian had our attention instead.

Played for:
The Allied Prisoners of War

Why you should vote for him:
Because it is Stallone!

Why you should not vote for him:
Stallone looked awkward as a soccer goalie, and was a reluctant sports hero in this movie.

During the filming of "Victory", special undersized goalposts were used when Stallone was on screen to make him look bigger, rather than the standard 8'x24' nets.
Quote
Refresh comments list
RSS feed for comments to this post