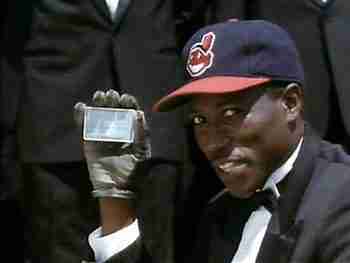 For the record, this induction is for ONLY the Wesley Snipes version in Major League and not the Omar Epps portrayal in Major League 2. This is not a shot at Epps, who was an excellent choice for many sports movies, but following the charismatic Snipes was nearly impossible.

As Willie “Mays” Hayes, Snipes’ character may not have been essential to move the plot along, but he brought a cool factor that the movie may not have had otherwise. Hayes was a dynamic leadoff hitter with swagger (before anyone knew what that word was) with great one-liners throughout. The best statement we can say is that ML2 suffered a lot by not having Snipes repeat the role, although we do have to say one thing….we have a hard time believing that Hayes, could never hit the long ball!

The Fictitious Athlete Hall of Fame is pleased to welcome Willie “Mays” Hayes into the Class of 2017.