Neil Smith was the second overall pick in the 1988 Draft and the former Nebraska Cornhusker would emerge as the star Defensive End for the Chiefs for years.  Smith was a Pro Bowler from 1991 to 1995 and in those last four years he finished double digits in the Sack department.  His best total was in 1993 when he finished atop the National Football League with 15 and he would have 85.5 Sacks for the Chiefs. 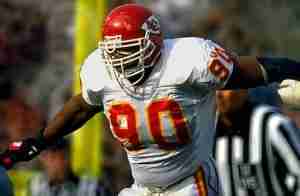 Neil Smith was a multi faceted Defensive End who was equally adept at stuffing the run as defending against the pass.  His true gift may have been sacking the Quarterback as he led the NFL in that category in 1993.  Smith was a six time Pro Bowler and though his skills were slightly diminished in the second half of his career, he was able to aid the Denver Broncos in their two consecutive Super Bowl wins in the late 90’s.