Committee Chairman: Spheniscus, we are turning our attention for the first of two times to the St. Louis Rams, specifically that “Greatest Show on Turf” team that was one of the most exciting squads to watch that I can remember.  Now, I am going to try and talk about Wide Receiver, Isaac Bruce without moaning about how the great sports city of St. Louis got screwed for a city that just got another team that they won’t care about.  Okay, I am going to try not to mention that again.

Committee Chairman: Spheniscus, this is the third time that Kurt Warner has made the Finalists but this time he is the best (and only Quarterback) in this group.  His main target, Isaac Bruce is also here and as poetic as it is for them to both go in together, it won’t happen.  There is an unspoken hierarchy here, and Warner has it over Bruce.  My initial thought is one Ram going in and 18 camera shots at Brenda Warner during the induction ceremony. 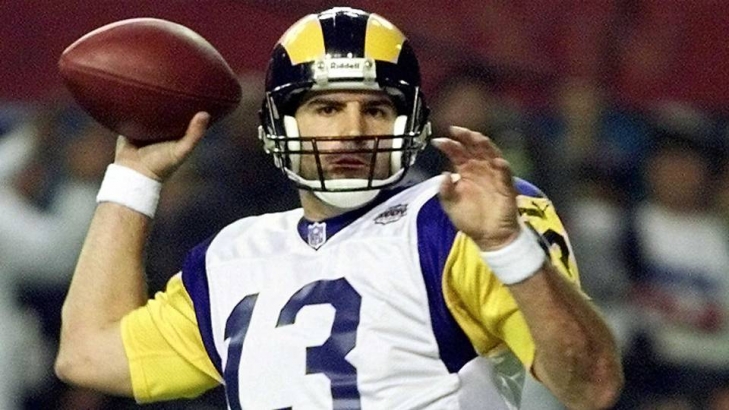 Like so many on the all-time Rams list, Kurt Warner was a hard one to place mainly due to the long existence of the franchise and the number of great players that they had.   So when you have a player regardless of the caliber who was only there six seasons but when three of those campaigns were as spectacular as what Warner had from 1999 to 2001 he has to be on this list at a high spot. Though we understand why you might think this is not high enough, or maybe if you believe this is even too high!

This one is a little anti-climactic.

Former Quarterback, Kurt Warner has announced that his wife Brenda will be his inductor for this year’s Pro Football Hall of Fame ceremony.  Brenda has famously (and at times infamously) been at his side long before he was famous, and they are still together today.  Essentially, they have been inseparable.

“Tis the season to talk about Hall of Fames isn’t it?

The Pro Football Hall of Fame has announced their Finalists, and there is no major surprise, which is usually the norm.

The headliner for most people (and for us) is former Quarterback, Brett Favre who two months ago had his number retired by the Green Bay Packers.  Favre is entering his first year of eligibility and is ranked #1 by us.

Favre is not the only first year eligible player to make the list of Finalists as Wide Receiver, Terrell Owens and Offensive Guard, Alan Faneca have also made the cut.  They are ranked and #7 and #5 respectively on our Notinhalloffame football list.

To enter the Pro Football Hall of Fame must receive 80 percent of the votes.  A maximum of eight inductees can be chosen per year.

Like the Baseball Hall of Fame, We will be debating each Pro Football Finalist.

Terrell Owens is a Football Hall of Fame Finalist, but not everybody is happy about that.

Former St. Louis Rams Head Coach, Mike Martz, spoke with the St. Louis Post-Dispatch and was very candid about he felt about Owens being a Finalist, while his former receivers, Isaac Bruce and Torry Holt were not.

"You can't print how I felt when T.O. leapfrogged those two. That's just plain out-and-out ridiculous.  If they big-timed it and did all that dumb stuff, they'd get in probably earlier.  I think they'll eventually get in. I don't think that's an issue, but it's tragic that people think of them like that. If Marvin Harrison gets in, how could they not get in?

Look at their production. More importantly, look at their yards per catch. And then look at it consistently over a long period of time -- it'll compare to anybody. In some cases, nobody comes close. I mean nobody's even come close to what Torry did."

Along with Owens, Marvin Harrison is one of two Wide Receivers who made the Finalists for the Hall of Fame.  Bruce and Holt did not make that cut this year.

For reference here are the key statistics for all four players:

While T.O. does seem to have the greater overall statistics, all four are Hall of Fame caliber and it is worth noting however that Owens is the only one without a Super Bowl Ring.

Martz might be upset over the perceived snub of his Wide Receivers, he does have two players, Quarterback, Kurt Warner and Offensive Lineman, Orlando Pace have made the final round.

On Saturday, the next class of the Pro Football Hall of Fame will be announced, and you can believe we will be watching intensely!

Once again we here at Notinhalloffame.com would like to congratulate the Pro Football Hall of Fame Class of 2017.