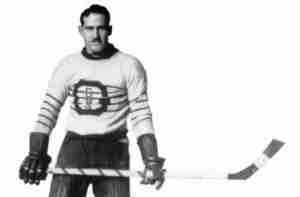 Although Harry Watson was a career amateur Hockey player, it was not because he did not have multiple and lucrative offers to play professionally. Watson was a two time Allan Cup winner and he led his team (the Toronto Granites) to an Olympic Gold for Canada in the 1924 Olympics where he scored 36 goals in five games. Watson not only made the Hockey Hall of Fame, but was also selected for the International Ice Hockey Hall of Fame.

The second of two Veteran’s Category inductees in the 1994 Class, Harry Watson entered the Hall with a decent resume as a five time Stanley Cup champion and a seven time All-Star game participant. Watson was a decent scorer and rarely made mistakes, but his overall performance was usually as a complementary player and not necessarily as the top star. Granted, he did play in many All-Star games, but back then it was the Champions (of which he was on five) against the best players from the rest of the NHL. It is not a travesty to have Harry Watson in the Hockey Hall of Fame, but if he was omitted it is not exactly a huge snub.