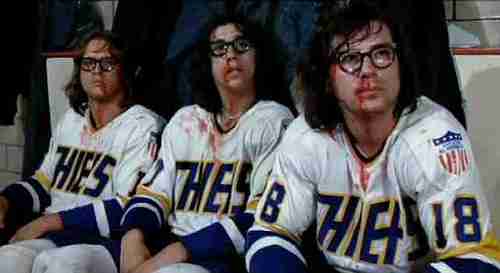 Let’s forget about the forgettable sequels shall we?

Slap Shot is without any doubt the most influential hockey movie of all time.  This cannot be disputed, and if it, that person is what we like to call, wrong!

The Hanson Brothers are the first inductees into the Fictitious Athlete Hall of Fame who are inducted as a group, and how can you separate them?  Played by three legitimate hockey players (David Hanson, Steve Carlson & Jeff Carson), the bespectacled trio were simpletons off of the ice and feared goons on it.

This was the group that brought popularity to the team and arguably to the movie itself.

It is with great pleasure that the Fictitious Athlete Hall of Fame inducts the Hanson Brothers!