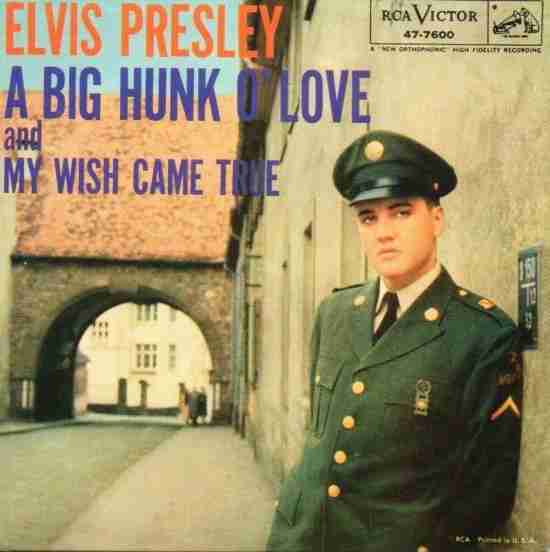 As mentioned in a previous chapter, through the genius of Colonel Tom Parker, Presley had a stockpile of songs for release while he was away so that they could be released and keep him in the musical spotlight, however without the benefit of television appearances it was difficult for him to remain dominant.  How could he, the medium of television had become far too powerful.

Still, Elvis and his team were able to run one recording session three months into his military career (June, 1958) which is where “A Big Hunk O’ Love” originated from.  While this went to number one, and is from “The King” of his pantheon of hits it is one that Presley fans rarely clamored for after 1959.

There could be a few reasons for that, the biggest is that with him overseas upon the release of the song he couldn’t engage the audience visually with that song, thus no footage exists of him performing the song in his prime.  Presley also didn’t perform it in concerts much at all, and only in his jumpsuit phase did he dust it off and perform it regularly and by then it was never going to be a must requested song from the Presley fans.

It might also be because the song had a faster pace and a bit of a harder sound and though Presley had the chops to pull it off, it was atypical of his future recordings.

This would be the first Presley song written by Aaron Schroeder, who will be talked about a little more as he would pen seventeen songs (and of course a few more number ones) for Elvis.

Now if only there was footage of him performing this song in ’59.  That would have been a hell of a lot cooler than “Elvis has left the building” era, and Elvis hasn’t left the building yet for our purposes.  We still have more trips to Memphis to come.