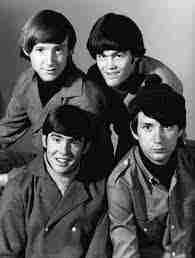 We debated a long time whether this should be on the ballot or not, in fact it may have given us a migraine or two.  At the end of the day we decided to let all of you decide their fate, and you told us loud and clear by placing them in the Fictitious Rock and Roll Hall of Fame on the first ballot.

The origin of the group came from television executives looking to follow a fictional band in the vein of the Beatles’ Hard Days Night film.  With Davy Jones already under contract after a successful run on Broadway, three more cast members were needed and after an exhaustive search, Mickey Dolenz, Peter Tork and Michael Nesmith were cast.

The show was an instant hit and the Monkees became stars.  Pop songs were written for them and with the regular television exposure they had, they were able to generate a lot of Billboard success, though on most of the songs they didn’t play an instrument on the recording, though on later songs they did.

This is where it gets a little muddled as the foursome were billed on the album as the creators and would go out on tour performing those songs to the delight of thousands of kids.

That is where they ran into problems as a group like the Monkees is the type that older music fans and music critics want to take down.  Ironically, it was Michael Nesmith who did it for them.  We’ll let him explain from an article in the Saturday Evening Post:

“The music had nothing to do with us. It was totally dishonest. Do you know how debilitating it is to sit up and have to duplicate somebody else's records? That's really what we're doing. The music happened in spite of the Monkees. It was what (Don) Kirshner wanted to do. Our records are not our forte. I don't care if we never sell another record. Maybe we were manufactured...Tell the world we're synthetic because we are. Tell them The Monkees are wholly man-made overnight that millions of dollars have been poured into this thing. Tell the world we don't record our own music. But that's us they see on television. That show is really a part of us. They're not seeing something invalid.

The press decided they were going to unload on us as being somehow illegitimate, somehow false. That we were making an attempt to dupe the public, when in fact it was me that was making the attempt to maintain the integrity. So, the press went into a full-scale war against us. Telling us The Monkees are four guys who have no credits, no credibility whatsoever, who have been trying to trick us into believing that they are a rock band. Number one, not only was it not the case, the reverse was true. Number two, [for] the press to report with genuine alarm that The Monkees were not a real rock band was looney tunes. It was one of the great goofball moments of the media, but it stuck.”

Actually, that sums it up perfectly.

Regardless of how you saw the Monkees, the fact remains that this was one of the most successful groups of the 1960’s and they have a catalogue of hits that hold up very well.

The Fictitious Rock and Roll Hall of Fame is excited (and admittedly a little surprised) to welcome the Monkees to the Hall.

More in this category: « The Blues Brothers