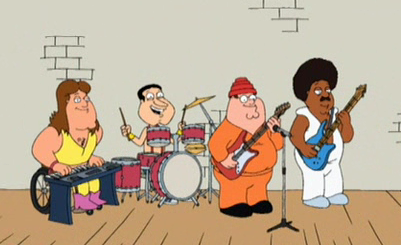 We never saw them play, as right before they were about to go on at their first gig at a prison they realized they knew no songs. Still, we were treated to their karaoke version of Journey’s “Don’t Stop Believing” and the funniest mismatched outfits this side of Quahog.

Why you should vote for them:
Anything Family Guy related is always good for a laugh.

Why you should not vote for them:
We can’t really think of any band that had a worse first gig.

Rate this item
(0 votes)
Tagged under
Tweet
More in this category: « Faith + 1 Fats Mallard and the Bluegrass Fireball »