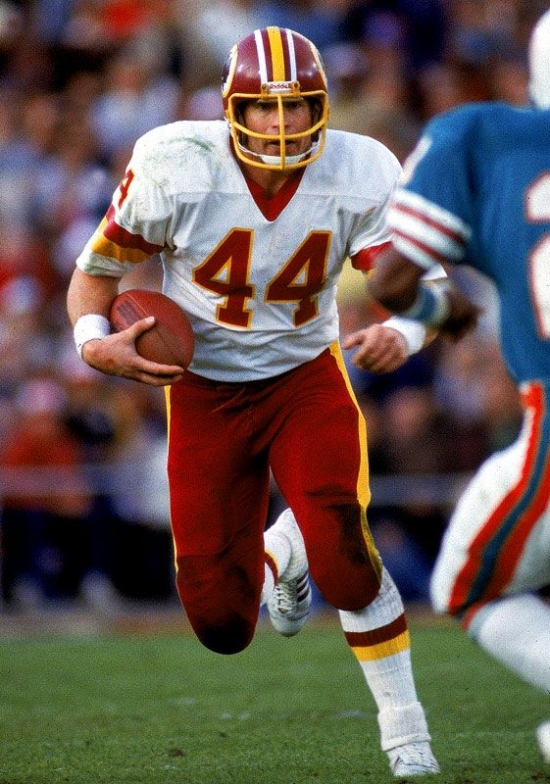 While everyone (and rightfully so) thinks of John Riggins in a Redskins uniform.  That wasn’t where he started, as the former Kansas Jayhawk was a New York Jet for the first five years of his career.

Riggins signed with Washington as a Free Agent in 1976, but his first two seasons were poor, and a knee injury marred his second year. He powered back in 1978 with 1,014 Rushing Yards, and 1,153 in 1979.  Riggins was finally the Running Back that they needed, but they would not have him in 1980, as a contract dispute took him out of the entire year.

The Redskins saw Riggins return, and while the 1981 and 1982 regular season could be labeled as average, his '82 playoffs were phenomenal.  Riggins rushed for 166 Yards (a then-record) in Washington's Super Bowl XVII Championship, and he also had 610 Rushing Yards overall in the playoffs.  The Running Back was on a roll, and in 1983, Riggins had rushed for 1,347 Yards and a league-leading 24 Touchdowns.  Riggins was a First Team All-Pro and the Bert Bell Award winner that season and he again led the NFL in Rushing Touchdowns with 14, the season after.  Without his run from '82 to '84, there was no way that Riggins gets into Canton!

He played one more year before retiring, and he accumulated 7,472 Rushing Yards and 79 Rushing Touchdowns for Washington.

Riggins entered the Pro Football Hall of Fame in 1992.