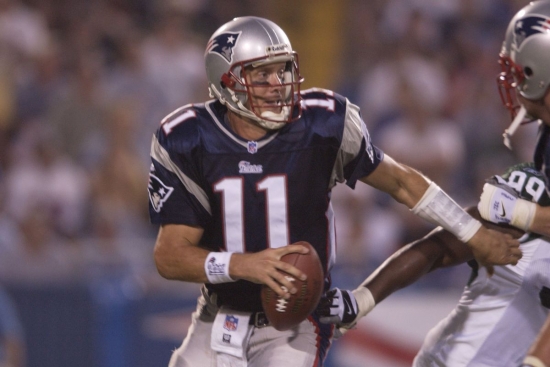 Before the Patriots had Tom Brady, there was Drew Bledsoe, who New England took with the First Overall Pick in 1993.

Bledsoe started for the Pats as a rookie, and the following year after that, he was one of the better Quarterbacks in the NFL. Bledsoe was a Pro Bowl Selection in 1994, 1996, and 1997, and he led the NFL in Completions in '94 and '96.  The QB also was first in Passing Yards in 1994. 1996 was arguably his most satisfying season as he took the Patriots to a Super Bowl appearance, though they lost to the Green Bay Packers.

Bledsoe remained a high-end QB, but in 2001, he suffered a brutal injury from a hit, and Tom Brady stepped in.  When Bledsoe was able to come back, Brady was on fire, finished out the season, and would lead the Patriots to their first Super Bowl win.  Bledsoe may not have played in Super Bowl, and he did play in the AFC Championship in relief of Brady, who was hurt in the game.

With Tom Brady ascending to stardom, Bledsoe was traded the Buffalo Bills.  As a Patriot, Bledsoe threw for 29,657 Yards, and 166 Touchdowns, and in 2011, he was inducted into the Patriots Hall of Fame.