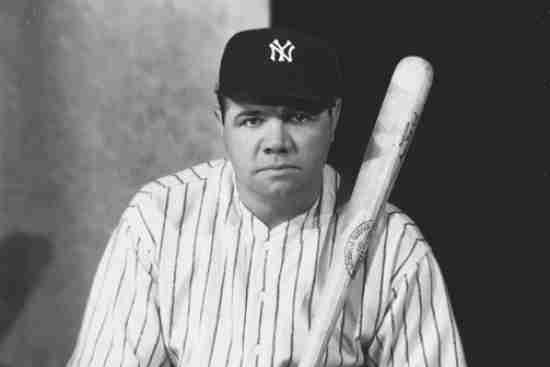 The New York Yankees are the most successful baseball team of all-time:

Love them or hate them, this team has been loaded throughout the years with talent after talent and you might think that it would have been difficult to come up with a consensus number one for the Bronx Bombers, but it really wasn’t.

It can be nobody other than Babe Ruth.


Ruth wasn’t just the best player in baseball at one time, he wasn’t just the most known and popular baseball player, he was the biggest sports figure and arguably the first megastar in team sports.

When they said that the original Yankee Stadium was the “House that Ruth built”, it is metaphorically correct.  After arriving in New York after being foolishly sold by the Boston Red Sox, Ruth changed the game with his power and he ushered in a new era to the game.  He would blast 659 Home Runs over his Yankees career, a number that had you told anybody in 1910 would occur would that individual would have said you were delusional.

Sometimes forgotten is that Ruth had so many other facets to his game.  Aside from being a quality Pitcher, Ruth won a Batting Title and had eight seasons where he batted over .300.  He would also lead the American League in On Base Percentage ten times (nine with New York), five of which saw him exceed .500.  Fourteen seasons he had an OPS over 1 and sabremetrically speaking he led the AL in bWAR twelve times (eleven with New York).

More importantly, “The Sultan of Swat” would take the Yankees to four World Series Championships.