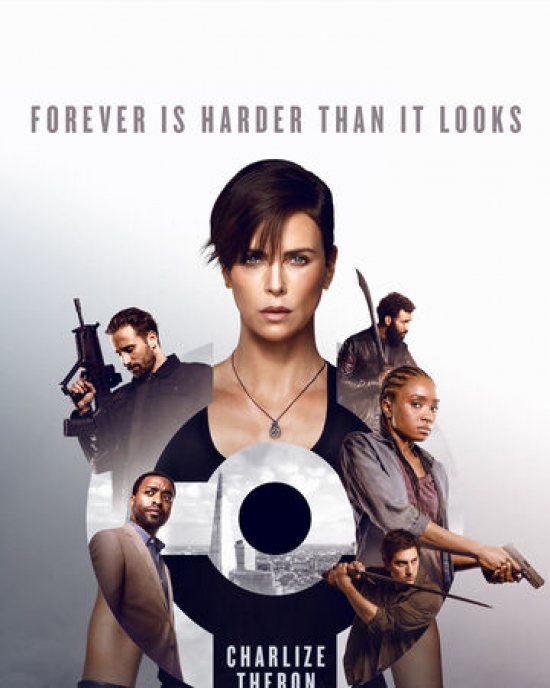 Well, after Friday nights dismal film that I reviewed last (The Predator), we decided to go back to NETFLIX and try something that people have been talking about for the last few weeks. One of NETFLIX’s more recent additions is “The Old Guard” starring Charlize Theron. Theron is an amazing actress with a prolific resume and accolades from numerous academy’s and award shows. For the most part, we have loved pretty much most of her films, yes there was the odd dud (Aeon Flux), but her movies are entertaining and action packed, especially the more recent ones (Atomic Blonde, Mad Max: Fury Road). With that in mind, we cued up NETFLIX, opened our wine and hunkered down to watch her next flick.

“The Old Guard” is based from a series of Graphic novels, and it tells the tale of a small group of immortals who have been affecting history for thousands of years. These immortals, born of mortal parents discover at some time during their life that they cannot be killed. As they are gifted with immortality, they feel it is their mission to protect mankind and basically save the world on a continual basis. These immortals are initially linked together by dreams and once they find each other, those dreams stop. Well, stop until a new immortal is created. The Old Guard starts with this intrepid team of immortal mercenaries being gunned down, and a narration provided by Andy (Therron) explaining that they are all immortals (sort of) and that they only have so many lives in them and after a time, they might actually die for real. Well, as this is the start of the film, it is not yet time, they arise, wipe out all the people who tried to take them out, then the story really begins.

After their resurrection and the action packed revenge sequence on the so-called ambushers, the team of immortals go into hiding in a safe house that has been theirs for decades. It is at that time they come to the realization that there is a new immortal being born if you will. Nile (Layne) a US Marine deployed to Afghanistan is killed by a Taliban, only to come back to life again soon after. The team all dreams of her at the moment of her birth (death) and Andy (Therron) travels to Afghanistan to retrieve Nile (Layne) and have her (reluctantly) join the merry team of immortals.

Once back in France at the hideout, a little more is revealed to the newest member. Andy (Therron) is the leader and the oldest of them all, not saying how old exactly, but it appears to be thousands of years. She mentions two others who were as ancient as her, a man who just didn’t recover after a battle, as his time was up, and another girl Quynh (Ngo). Apparently, Quynh and Andy were both captured centuries ago and as a punishment (and as the local’s thought they were witches), Quynh was put in an Iron Coffin and thrown into the ocean. It is there, that she would drown, come back to life, only to drown again. Pretty much spending eternity at the bottom of the sea. (This little tidbit of info will be important at the end of the movie). Andy searched for her for years, and then gave up looking. That is when she met up with the rest of her band. These are Joe and Nicky (Kenzari and Marinelli respectively), former soldiers from the Crusades (on opposite sides) who had found each other, found love and then found Andy. The last of the foursome is Booker (Schoenaerts) a former soldier of the US Civil War.

Now that they are all together and everyone is caught up, they look to wreak revenge on Copely (Ejiofor) the man who set them up at the start of the film. See, he is actually working for a big pharmacy company and an egotistical, narcissistic, rich, slimy piece of crap, who goes by the name of Merrick (Melling). Merrick wants to experiment on them to create a fountain of youth, for as he says if he doesn’t do it, someone else will. Of course, these heroic immortals track them down, exact their own style of retribution, all completed with gratuitous amounts of violence. As this film is pretty predictable, (Well come on, they are immortal after all!) we pretty much know who is going to win. I won’t reveal the how/why and methods, but it is full of action, a few surprises and the final solution might even make you laugh a bit. While not a definitive ending, as it did set up the potential for a sequel, at least it felt like a chapter was concluded.

At this point, let us look at the main cast a bit.

Charlize Therron as Andy: As the top billed star and central focus of the film, I found Therron able to deliver as usual. Over the last few years she has moved more and more to the action film realm over the drama’s and I think that she is really doing a great job of it. Naturally athletic, she can carry the action film without you scratching your head saying, isn’t she too old, fat, broken etc like I have been doing with some of the “old” action stars of late. She emotes intensity and compassion in equal measures in this film (as in all of her films), but does need a little bit more in the comedic department. In our opinion, she did a pretty good job as the Scythian warrior who never died. As always, we look forward to her next film or project, as she has never really failed to entertain us (ok, I already mentioned Aeon Flux, so lets not go back to that piece of fecal matter)

Kiki Layne as Nile: This was the first movie that I had seen with Layne. When checking her resume on IMDB, she has only been around for a few years and I have not seen any of the films or shows that she has been in. I think she did pretty good as the newest immortal, and her portrayal of a Marine was not way out there. What I did like about that part was her feeling of brotherhood (or sisterhood if you will) with her other squad mates. Also, her confusion and apprehension was sort of believable as she discovered who and what she really was. I think that she has a lot of potential and in time, she may even be able to carry a film on her own. I look forward to seeing what she will do in her career as time goes on.

Matthias Schoenaerts as Booker: As the former soldier of the US Civil war, Booker was an interesting character. He did not seem like he wanted the life of an immortal, yet he always wanted to do what was right. Sometimes, not with the expected ending. You could see that Schoenaerts character (Booker) was in love with Andy, but would not really admit it. He is a pretty good actor, and I have seen him in some other movies in the past (specifically Red Sparrow, The Drop and Black Book), and as I mentioned in my review of Red Sparrow, Schoenaerts does a pretty good job in his films.

Marwan Kenzari as Joe: As one of the Crusaders, I found Kenzari to be entertaining. He played his role admirably and it went along well with the storyline. While he did seem familiar to me when watching the show, I had to look to IMDB to see what else he was in. I had seen him Murder on the Orient Express, The Mummy and Ben Hur, however, none of these roles stood out for me. His character was important to the team and did provide ample support to Therron, Schoenaerts and Layne.

Luca Marinelli as Nicky: The second Crusader I found to be much the same. An entertaining character that helped fill out the team, but not necessarily one that would make an impact. This was the first time I had seen him in a film as much of what he does is in Europe. However, I think he does have some potential and am curious to see if he will take other films in Hollywood vice Europe.

Chiwetel Ejioforas Copely: Ejiofor is really the only other name in this film that was common knowledge to my wife and I. His role and character are vitally important to the film, not only as focal point for revenge, but also as a means to reveal the true purpose of the Immortals. He is an accomplished actor with an impressive resume of films. I had first seen his performance in the film Amistad, and his career has continued skyward ever since. Starring in such films as Inside Man, Children of Men, 2012, Salt and probably his most important role in 12 years a slave. Each film was well done, and his role/character was integral to the story. His acting always comes across as believable and completed with the appropriate amount of gravitas to suit the scene or situation. As always, he delivers in all films and I always look forward to seeing him in future films.

Harry Melling as Merrick: Melling is another one of those actors that you love to hate. His appearance and mannerisms always bring forth the urge to reach into the screen and smack him one across the face. Like I have said with some other actors who exude the same emotion, either they are so talented to make you feel that way…or they really are just a douche. Either way, his portrayal as the key money man and antagonist was spot on. You will hate his character (which is what they are going for here) and will be very happy when he finally gets defeated.

This film was pretty much packed with action and had some pretty good cinematography to represent the different parts of the world that they had visited in their lives and mission. What I found extremely interesting is that each immortal also carried a weapon that was symbolic of their own origins, not to mention the fighting styles. Joe and Nicky (The Crusaders) favoured their swords and hand to hand combat, while Booker and Nile (more modern warriors) stuck with the more modern firearms. Andy (Therron) was just as versatile as hell and could adapt to every style and form of weaponry. The storyline was pretty consistent and there were no real holes (well maybe a few small ones) in the story, but nothing serious enough to turn off the film or cry WTF. However, when I started watching this, I automatically thought of Highlander (classic 1986 film with Sean Connery and Christopher Lambert…remember the catch line…There can be only 1!), but there are enough differences in the film to make it more relevant and a little less cheezy.

I actually look forward to seeing the sequel(s) if they ever come about. Were we entertained? Yes, we were. I would recommend this film if you are a fan of action/movies and specifically a fan of Theron and her latest work.

If you are interested in seeing other films with the main cast, consider the following recommendations.