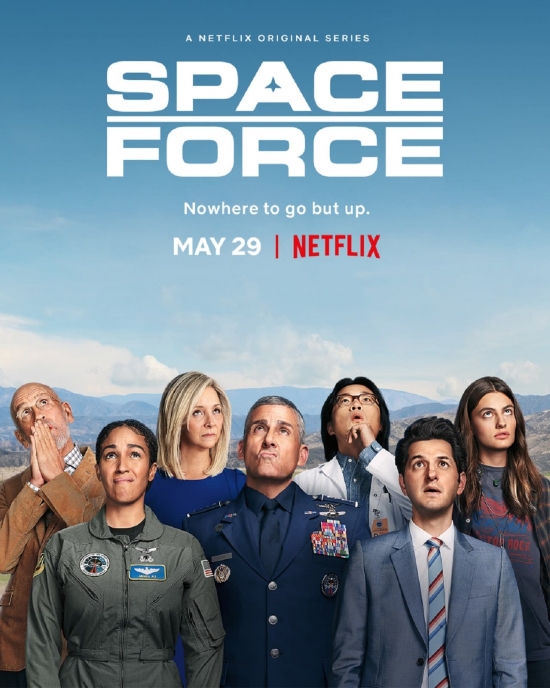 Over the last few weeks, my wife and I have watched the full premier season of Space Force on NETFLIX. Space Force, NETFLIX’s newest original comedy is about the creation and early days of the current American administration’s latest military arm or command if you will.

This little time-waster stars the comedic genius of Steve Carell and John Malkovich in the title role as the Commanding General and Chief Scientist of the newly minted Space Force. Steve Carell is General Mark R. Naird, long under the thumb of the current Chief of the Air Force, General Kick Grabaston (Noah Emmerich) is finally given his own branch of the Armed Forces, Space Force. He takes over this new command, much to his dismay, as he was desperately hoping to command the Air Force itself. In creating the new element of America’s fighting might, General Naird (Carell) must battle an inept administration, political sycophants, jealous colleagues on the Joint Chiefs, a staff that is either too stupid, too smart, too incompetent or just spies for a foreign power. On top of that, he has a failing marriage and must raise a rebellious teen age daughter.Not exactly a recipe for success for a professional or personal life.

For it’s premier season, the story arc consists of General Naird with the assistance of Dr. Mallory standing up the Space Force itself. Naird’s (Carrel) mission, besides standing up the force is to put “American Boots on the Moon!” Naturally, when Naird (Carell) makes his speech during the inauguration of the command, his explanation of “American boots on the Moon” has his own unique spin to it, that I am sure everyone will enjoy.

From the creation of the Force, to the finale of landing on the Moon, Space Force is a light hearted romp. It is not always hilarious, though there are some scenes that are literally laugh out loud. It is amusing, sometimes very silly, and may not be for everyone. If you enjoy “The Office” or Steve Carell as an actor himself, you will enjoy this series. I also found that if you follow current politics in the United States, that there a number of subtle nuances and jokes that increase the potential for enjoyment. Additionally, if you are in the military, or have military experience, the humour and one liners will be appreciated immensely. If you don’t, there may be some nuances that will escape you.

Now to look at the cast:

Steve Carell as General Mark R. Naird: Carell is Carell, there is no escaping his style and delivery. As I mentioned previously, if you like the Office, you will probably like this show. Carell plays the tightly wound Naird, who is just trying to do his job, amidst all the problems that he is facing. He will break out into song when stressed, has no filter, and is sometimes oblivious of his surroundings or social nuances. Pretty much a typical Carell character. This character, while not unique, provides the vehicle for lead character to deliver the many puns, one liners and innuendos. Carell does a great job in this role, and I continue to be a fan of his work.

John Malkovichas Dr. Adrian Mallory: As I have mentioned in other reviews, Malkovich is a personal favourite of mine. His penchant for a dry delivery of jokes, laden with sarcasm contribute to many of the programs laughs. An accomplished actor, Malkovich continues to add style and substance to any production that he is involved with. As for his character, the self righteous scientist, Mallory is a natural balance to Naird’s “must follow the commands” mentality. The chemistry between Carell and Malkovich is great and really adds to Space Force writ large.

Ben Schwartz as F. Tony Scarapiducci: Scarapiducci is the Space Force public relations officer, or basically in charge of Twitter and social media. Personally, I find his character kind of annoying, but then again, I find most press media types annoying anyways. So I guess he is playing the role well. His character/role, much like all Public Affairs officers always tries to put a positive spin on all activities, no matter what he does to hamper the mission itself. Schwartz is relatively new to me as a viewer, though when I checked his resume, he is pretty accomplished in the comedic realm.

Tawny Newsome as Captain Angela Ali: Newsome portrays the only other really professional serviceperson in the series. A dedicated Air Force officer, her character is serious with a MacGyver like attitude to get things done. Her competence as an officer is a nice balance to the incompetence surrounding her. As with Schwartz, I have not really seen her in anything else, but she does have a prolific Comedy background and has been in numerous programs. I like her character and will definitely look for other programs that she has done and check them out.

Don Lake as Brigadier General Brad Gregory: The character like Scarapiducci is not up there on my “like” scale. I know he is supposed to be a comedic balance to Naird (Carell), but that is where I think they could have made that character even better. He should have been the consummate professional, trying to help Naird complete his mission. That would leave more avenues for Naird (Carell) to also demonstrate some of his comedic genius. Lake is a solid character actor who could be better employed/utilized in this program. Sometimes, a show does not need everyone to be useless.

Lisa Kudrow as Maggie Naird: Now we get to the characters who are part of Naird’s family. Kudrow is the estranged wife of Naird and is currently in prison. This further complicates his life as he tries to deal with his wife whom he loves, and the issues of now being a single parent raising a troublesome teenager. Kudrow is ok here, but I am sorry, to me she will always be Phoebe on Friends. I can’t see her on anything else unless the character is similar. Her role on Friends has pretty much type cast her (to me) in that role/character. As Maggie, she has a little bit of Phoebe, but not enough for me to really appreciate it. I hope that as this program continues (and I really hope it does), that I will grow to like her character.

Diana Silvers as Erin Naird: This is another new actress for me, and I have not yet decided how I feel about her talents/skills. Relatively new to the small screen, there is nothing in her resume that I had seen her in before to actually judge or compare. Mind you, she does play a teenager with great angst and confusion believably, I am just not sure on how I feel about the character at this point. As with the mother, (Kudrow), I hope that I will grow to like her character as the show continues.

There are a host of other actors/actresses in this series of various calibers to support this ensemble. All of them have varying pedigrees in television/Film and comedies specifically. Each and every one of them have brought their own talents to the show to make sure that it is enjoyable. Is this the best new comedy on television? No it is not. Is it consistently hilarious? Again, no. But, can you sit there and be entertained for 30 minutes and escape some of the worlds issues? Yes, you can. If you are looking for something light, topical and a show that while you may not always laugh out loud, you will smile at their antics, then “Space Force” is definitely worth checking out. Hell, there are worse ways to spend you time than this program. I especially recommend this program if you are a fan of Carell and Malkovich, these two are the key to the show and will make sure that you will at least chuckle every once and awhile.

If you are interested in watching something from the key cast members, consider some of the following recommendations: