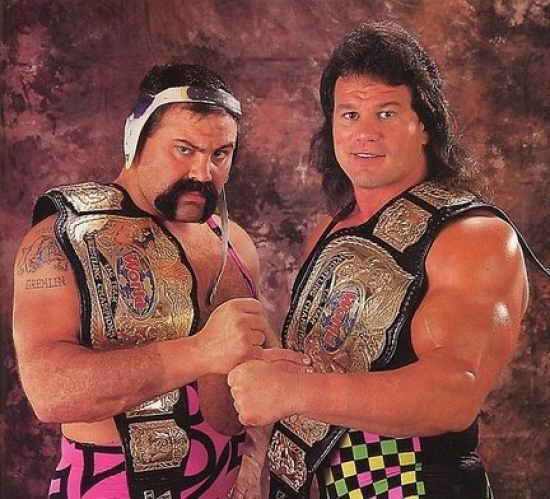 Although we recognize that Scott Steiner had a very successful solo career winning the WCW World Heavyweight Championship and Rick Steiner had decent singles run before and after his partnership with his brother, it was as a tag team where they had their greatest impact


Actually, impact is a great word. The Michigan based brothers delivered an intense offensive assault on their opponents with innovative solo moves (Frankensteiner) and powerful double team maneuvers. They did not just overpower, but they outwrestled them too. Not only did the Steiners dominate WCW in an era where other great tandems existed, they were sent over to Japan and were a force in New Japan Pro Wrestling as well. They may not have equaled their success in the WWE, but they did win the straps twice and showed glimpses of what they were truly capable of.

We know this much; if someone spoke of a match of the night in the tag team ranks between 1989 and 1993, we would bet heavily that the Steiner Brothers were likely in that match. They were just too damned good not to be.

Why They Will Get In:
Nobody can argue their wrestling abilities when they were at their peak.

Why They Won’t Get In:
Scott Steiner has been very vocal about Triple H and other things in the WWE.

Should The Steiner Brothers be in the Hall of Fame?

Should The Steiner Brothers be in the Hall of Fame?