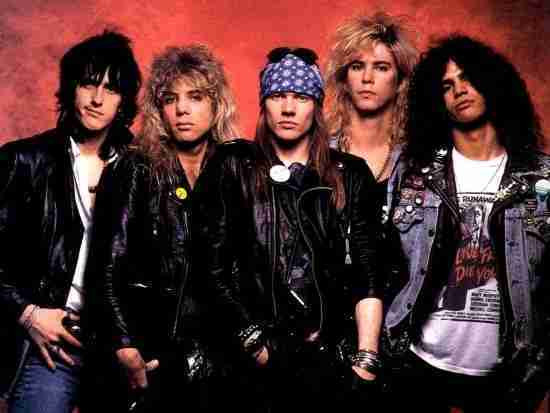 Although their induction was marred by Axl Rose’s pre show anti HOF diatribe, there was little doubt that Guns N' Roses earned their induction in their first year of eligibility. With a rough edge and a broad appeal, the L.A. based rockers kicked ass and took names in the musical world. Sounds like Rock and Roll to us!

Should Guns N Roses be in the Hall of Fame?

0 #6 Darryl Tahirali 2013-10-21 23:25
Live, learn, and I hope grow. I was wrong about Guns 'N Roses not being worthy of the Hall. It is. I am realizing that impact and legacy are powerful factors that can override the size of an artist's catalog (e.g., Sex Pistols, NWA).

Mea culpa.
Quote
0 #5 Sean -0001-11-30 00:00
I don't agree that GNR influenced grunge, but they WERE responsible for people not taking any of the latter-era hair bands (Nelson, Warrant, Extreme, Winger, and so on) very seriously so you could argue that they paved the way for grunge. Which was probably Jimmy's point.GNR lost a lot of its fan appeal with Axl Rose locking himself up in a studio for a decade to record "Chines e Democracy&qu ot;. They're now actually more popular with critics than fans, so it seems. They're higher on acclaimedmus ic.net's list than even Aerosmith and Van Halen are (though I think they're not as important as either). Their critical acclaim + commercial success is easily enough to get them in first ballot.Their influence comes up in very strange places sometimes too. The Manic Street Preachers are a Britpop band (not as important as Radiohead, Blur, Oasis, or the Smiths or remotely deserving of induction) whom you'd THINK would be more influenced by bands like the Smiths, but "Motorc ycle Emptiness&qu ot; (a great song) gives off a STRONG "Sweet Child O' Mine" vibe. This proves that their influence is larger than just hard rock.I don't like GNR as people at all, and find songs like "One in a Million" ; and "Get in the Ring" and "Used to Love Her" pretty appalling, but their hits are all awesome... And obviously the Rolling Stones and Sex Pistols (and in a few years no doubt N.W.A.) have proven that you don't have to be nice guys to be Hall-worthy. ..It's very strange to see DDT referencing Chuck Eddy considering DDT seems to have similar tastes to rock critics in general, and "Stairw ay to Hell" was rather silly putting acts like the Osmonds and Teena Marie and REO Speedwagon on a metal list while leaving Judas Priest, Iron Maiden, and the Scorpions off, not to mention that Eddy seems to have built a career on going against the critical establishmen t. He IS a great writer and fun to read, though.
Quote
0 #4 jimmy26 -0001-11-30 00:00
Really? Now we are considering longevity as a criterium? well forget Nirvana then. And throw out Mr. Hendrix. And the Police really only had three good albums right? Come on. GNR was rock! Yeah they faded quick but for five years they were the kings. And the connective tissue of saying enough with hair bands let's get back to taking names and kicking ass. And yes the production was well done but I do seem to recall Mr. Cobain being awful upset at one Butch Vig for his over producing the Nevermind album. He wanted a much more garage sounding album. But hey what did he know? And didn't Lars want to kill Bob Rock for about a year until the Black Album sold about it's fifteen millionth copy? It might have been too clean but it is still the definitive hard rocking album of it's or any other time. And boy it couldn't have come at a better time.
Quote
0 #3 Darryl Tahirali -0001-11-30 00:00
I've got to go with Musicologist 999 on this one. Undeniably, Appetite for Destruction is one of the greatest hard-rock albums ever (Chuck Eddy's elephantine list of great metal albums, Stairway to Hell, puts it at the number-two spot), and you can scrape together enough primo tracks from the two Use Your Illusion albums to make one hell of a killer mix
Quote
0 #2 Musicologist999 -0001-11-30 00:00
GnR definitely left their mark in the Hard Rock category, and yes, they made a huge splash with Appetite For Destruction, but their body of work is small, and Axl is now the only original member left. And Axl ain't doing himself any favors with voters by behaving badly in public and not showing up on time for concerts. Maybe Guns N Roses deserve a shot at induction. Then again, maybe not.
Quote
0 #1 jimmy26 -0001-11-30 00:00
Seriously! One of the greatest 20 bands ever and most definitely the connective tissue from heavy metal to grunge. Their is no category that they would not qualify in! Easily first ballot!
Quote
Refresh comments list
RSS feed for comments to this post