Dick Butkus to become the inaugural inductee to the Illini HOF 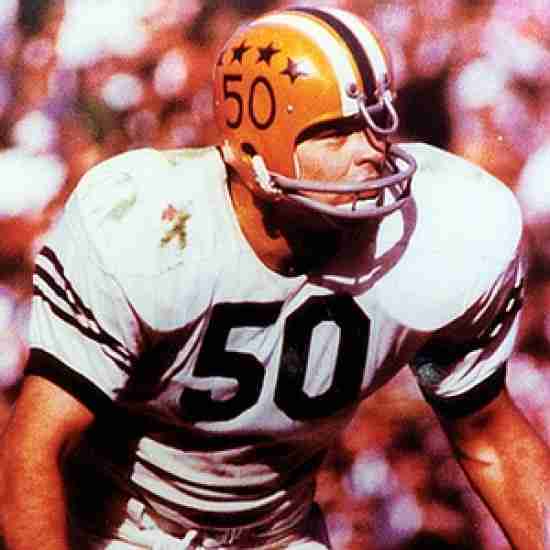 28 Oct
2016
Not in Hall of Fame
Regular visitors to Notinhalloffame.com know that we are methodically working on our Top 50 players of all time for each major North American Franchise.  Eventually, this will lead to how each team recognizes their past players/executives in respective Halls of Fame, Retired Numbers, Rings of Honor, etc…

What will we eventually get to is the major Universities and their respective Halls of Fame.

As such, it is news to us that the University of Illinois has finally decided to have an Athletic Hall of Fame and that former defensive football standout, Dick Butkus, will be the inaugural inductee.

Born in Chicago, Butkus played for the Fighting Illini from 1962 to 1964 playing both Center and Linebacker.  He would become a two time All-American (1963 & 1964) and would win the Knute Rockne Award in both of those years.  His other accolades include winning the Big Ten Player f the Year and a sixth place finish in Heisman Trophy balloting.

For his contributions to the College Game, he was inducted into the College Football Hall of Fame in 1983 and the Butkus Award is given annually to the top Linebacker in College.  His number was also retired by the University of Illinois.

While Butkus was named the inaugural inductee it was mentioned by the University that there will be more chosen for the first class, however no concrete number was given.

The official ceremony will be on September 29-30, the weekend where the Illini will host the Nebraska Cornhuskers in the Big 10 Home Opener.

We here at Notinhalloffame.com would like to congratulate both the University of Illinois and Dick Butkus at this time.