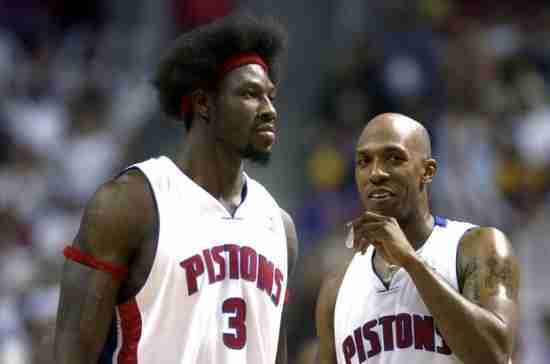 25 Nov
2015
Not in Hall of Fame
Our long and arduous work in progress of ranking the top fifty players for every North American sports team is underway, but after that is completed we will then take a look how each franchise honors their own in terms of respective franchise halls of fame, ring of honors, retired numbers and statues.

As such it is noteworthy to us that the Detroit Pistons will be announcing that the club will be honoring the jerseys of Ben Wallace and Chauncey Bilups through the 2015-16 Season.

Both Billups and Wallace were members of the Pistons 2004 NBA Championship Team and will have their number retired by the team,

Ben Wallace arrived in Detroit in 2000 and would make all of his four All Star Games while playing for the Pistons.  He would spend more than half of his career in Motown and the tall man would average a double digit Rebound figure in Detroit and would also put up stats that would gave him four NBA Defensive Player of the Year Results.

Big Ben would also post five season as an All-NBA Player (three as Second Team and two as Third Team) and was clearly a defensive standout in Detroit.

Billups would also become a four time All Star and a two time Second Team Defensive Player and three time post season All-NBA player as a Piston.  He would be named the MVP of the NBA Finals in 2004.

We here at Notinhalloffame.com would like to congratulate Chauncey Billups, Ben Wallace and the Detroit Pistons at this time.