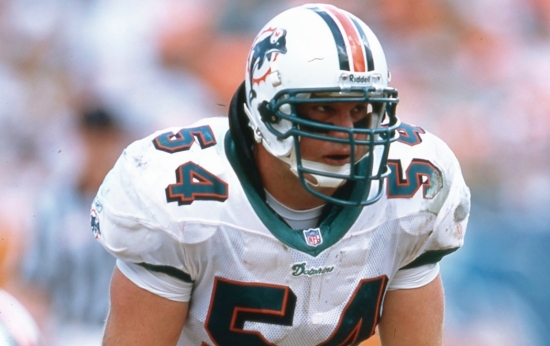 Endorsements mean a lot, especially when it comes from a Hall of Famer.

Brian Urlacher, who played his entire NFL career with the Chicago Bears and entered the Pro Football Hall of Fame on his first try in 2018, believes that he should be joined by another Linebacker, Zach Thomas.

He had this to say on the Pat McAfee Show, regarding Thomas.

“I’m going to give you one guy – Zach Thomas.  How the fuck is Zach Thomas not in the Hall of Fame? Put his stats up with mine Ray [Lewis], any other linebacker who’s even close to the Hall of Fame or been in the Hall of Fame. He’s right there with us, if not better in every category.  It pisses me off. Every year I advocate for him to get in, and he was a finalist a couple years, but they don’t put him in. I don’t understand. Maybe because he’s 5-10,” Urlacher said. “I don’t know. I have no idea. I don’t know. I don’t get it. It pisses me off.”

Urlacher is correct on everything.  An All-Decade Selection, Thomas was an eight-time Pro Bowl and five-time All-Pro, playing the bulk of his career with the Dolphins.  A Finalist the last three years, Thomas is currently ranked #10 on Notinhalloffame’s Football list of those to consider for the Hall.

Thomas will get eventually get in.  It is just a matter of when.