Ryan Miller named to the Buffalo Sabres Hall of Fame 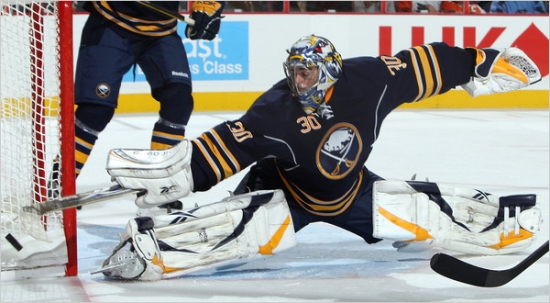 Regular visitors of Notinhalloffame.com know that we are slowly working on the top 50 of every major team in the NHL, NBA, NFL and MLB.  Once that is done, we intend to look at how each team honor their past players, coaches and executives.  As such, it is news to us that Ryan Miller will be inducted into the Buffalo Sabres Hall of Fame and that his number 30 will also be retired during the 2022-23 season.

The Michigan-born Goalie played the first eleven seasons of his NHL career with the Sabres where he won the 2010 Vezina Trophy.  With an overall Sabres record of 284-186-57, Miller led Buffalo to back-to-back Eastern Conference Finals (2006 & 2007).  He also was electric for the United States Olympic team in 2010, that won the Silver Medal.

We here at Notinhalloffame.com would like to congratulate Ryan Miller for his impending honors.