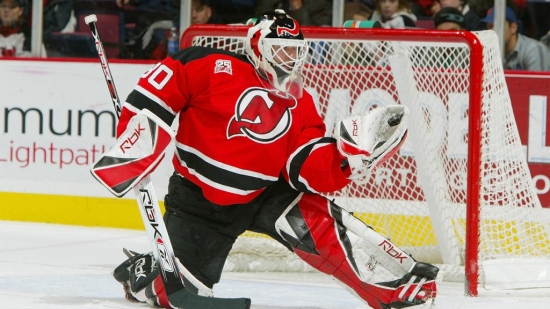 We love it when the decision is this easy.

Martin Brodeur is not just the greatest New Jersey Devil of all-time; he can stake a claim as one of the greatest Goalies ever.

Brodeur was a First Round Pick in 1990, and after playing a few seasons in the minors, he was named the Calder Trophy winner for the 1993-94 Season.  The Devils built their team from the Goalie out, playing a defensive game style that Brodeur was the perfect anchor for.

Playing with the New Jersey Devils until 2014, Brodeur accomplished more than any other Goalie in his era and the generation before and after.  With the Devils, Brodeur backstopped New Jersey to five Eastern Conference Titles with his team winning the Stanley Cup three times.

In terms of individual accomplishments, it is staggering just what he has in his trophy case.  In addition to his Calder, Montreal's native won the Vezina Trophy four times (2003, 2004, 2007 & 2008), and he was the runner-up for this accolade three other times and was in the top ten other times. Brodeur was a three-time First Team All-Star, four-time Second Team All-Star, and was a winner or co-winner of the William M. Jennings Award five times, which ties him for the most wins. On nine occasions, he led the NHL in Wins, was a five-time leader in Shutouts, and was a one-time top finisher in Goals Against Average.

He was an innovator in between the pipes.  Brodeur was such an exemplary puck handler that the NHL altered the rules to where Goalies could handle the puck…A.K.A., the "Brodeur Rule."

Will we ever see anyone top Brodeur on this list?  Not in our lifetime!