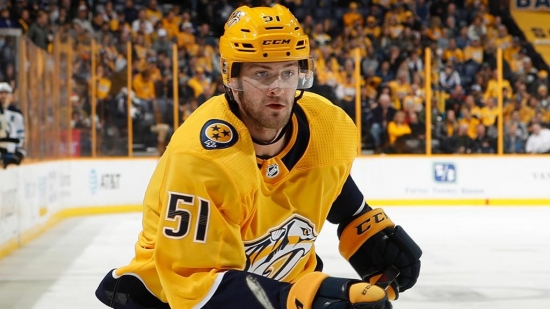 Austin Watson has had his share of controversy over his career, even as a Junior.  Nevertheless, he was a First Round Pick in 2010 (18th Overall), but it would not be until the 2015/16 Season where he found a set NHL home.

Watson settled in as a grinder, never having more than 20 Points in a year with Nashville, but maintaining a positive Plus/Minus with good Hit numbers.  He helped Nashville reach the 2017 Stanley Cup Finals, but he had his share of issues that did him no favors on and off the ice.

As good as Watson could have been, he is mostly known for his controversy.  He was charged with domestic assault and was suspended multiple times.  Watson was traded to Ottawa in 2020, ending his run with the Predators at 77 Points in 306 Games.

On almost any other team, he would not make a top 50, but the Predators are such a young organization, he ekes in here.

More in this category: « 49. Patric Kjellberg