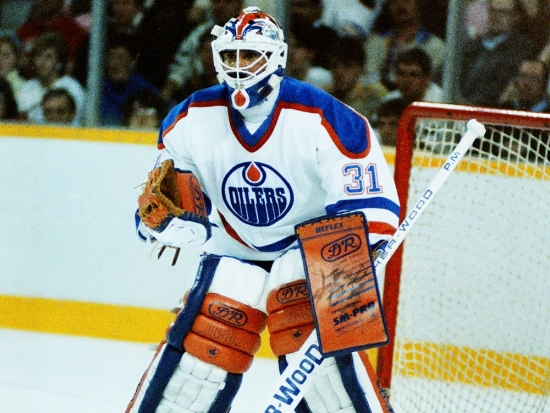 The offensive firepower of the Edmonton Oilers of the 1980s had never been seen before or since.  When you open up the ice as they did, it leaves you susceptible to the defensive side, and you require someone special in-between the pipes.  That is precisely what Grant Fuhr provided.

Fuhr was the 8th Overall Pick in 1981 and, as a rookie and sophomore, would share netminding duties with Andy Moog.  In 1983-84, he would lead the NHL in wins, and he was the starting Goalie when the Oilers won their first Stanley Cup that year.  He would continue to platoon often with Moog and later Bill Ranford, but it was Fuhr would backstop them in the playoffs for Cup wins in 1985, 1987 & 1988.

That last Stanley Cup win was especially sweet.  Fuhr had the best season of his career leading up to it as he was the leader in Wins, Goalie Point Shares, and was named a First Team All-Star.  He was on top of the world, made history as the first black player to win a Stanley Cup, and he was a significant part of a hockey dynasty.  He had earned a reputation as the top clutch goalie in the league, and when the lights were the brightest, he was at his best.

Sadly, Fuhr was dealing with injuries and substance issues and was suspended for the bulk of the 1990-91 season.  He was traded to the Toronto Maple Leafs after the season ended.

Despite the less than a glamorous end in Edmonton, Fuhr is highly regarded for the work he did there, and the Oilers are forever in his debt.  Fuhr entered the Hockey Hall of Fame in 2003.