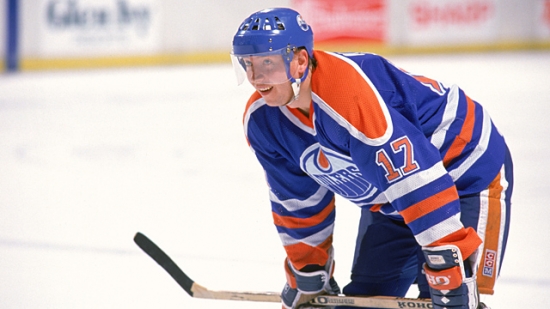 Before there was Teemu Selanne, there was Jari Kurri, the original "Finnish Flash."  Kurri is arguably the first real hockey megastar from Finland, and on a line with Wayne Gretzky, his talents were able to shine.

Kurri was drafted in the 4th Round in 1980, and he debuted in the NHL with a 75 Point Season.  From the 1982-83 to 1986-87, the Right Wing would always score over 100 Points, with two of them going over 130 Points.  He would have five post-season All-Star Selections (two First Team and three Second Team) and had four straight 50 Goal Seasons, winning the Goal Scoring Title in 1985-86.  Kurri was a vital part of the Oiler five Stanley Cup Championships, as he scored 202 Points in 146 Games.

It should be emphatically stated that while Kurri knew how to put the puck in the net, he also knew how to prevent it on his end of the ice.  He had four top-five finishes in Frank J. Selke voting as the game's top defensive forward.  He also won the Lady Byng Trophy in the 1984-85 season.

Kurri was traded to Philadelphia in 1991 (and then repackaged to Los Angeles) as part of Edmonton's fire sale.  Overall, as an Oiler, Kurri had 1,043 Points, with 474 of them coming as Goals.