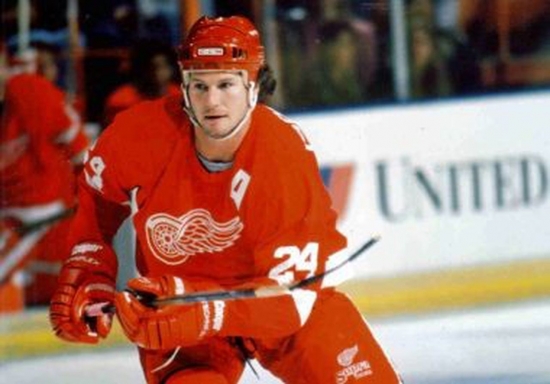 This is a controversial one for us as Bob Probert’s advanced stats show he doesn’t belong on a top-fifty list; however, his popularity and notoriety lands him a spot here.

Probert could score; he had 259 Points in 474 Games, but it was his pugilistic skills that he was most known for.  As one of the Red Wings enforcers, Probert led the NHL in Penalty Minutes in 1987-88 (398), and he contributed 62 Points.  He was named an All-Star that year, an incredible accomplishment for a fighter.  Probert had two more 40-plus Point years for Detroit.

Sadly, Probert was dealing with alcohol and drug issues and would be incarcerated in 1989 when he tried to smuggle cocaine across the U.S/Canada border.  It would be three years before he was allowed to play in Canada.  In 1994, Probert was a Free Agent when he crashed his car while driving drunk.  The Red Wings then gave up on him, and Probert would sign with Chicago.