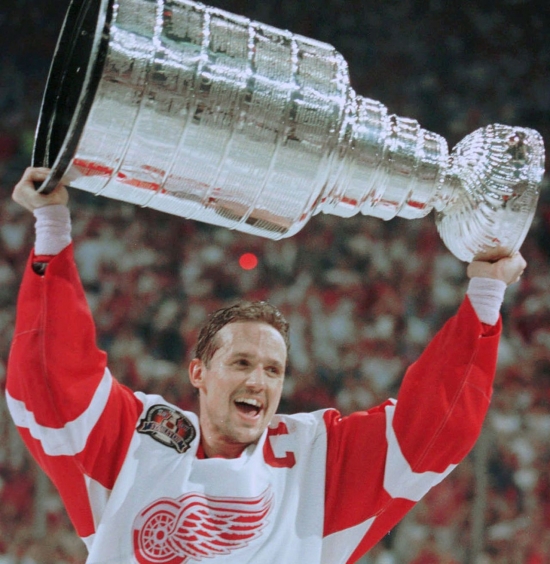 The Detroit Red Wings were an awful team in the years leading up to the selection of Steve Yzerman Fourth Overall in 1983.  We don't think it is hyperbole to state that it was "Stevie Y" who turned around the fortunes of Detroit's member of the Original Six.

Yzerman was phenomenal in his rookie season, scoring 87 Points and finishing second in Calder voting.  He went to that year’s All-Star Game, and at age 18, he was the first at that age to play in that contest.  Yzerman improved what was already an impressive game, and in 1986, the Red Wings named him their team captain, a role he held for 20 years.

In the 1987-88 season, Yzerman began a six-year streak of at least 100 Points scored. The Center might not have won a scoring title or a Hart in this period, but his peers named him the Lester B. Pearson winner (the players' version of the MVP, which is now called the Ted Lindsay Award).  That occurred in 1988-89, when he posted 155 Points, led the NHL in Even Strength Goals (45), and was third in Hart voting.

Yzerman might not have posted three digits in Points again, but around the mid-90s, rule changes and a more defensive-minded game made it hard for anyone to do that. Nicklas Lidstrom had arrived in the early 90s, and he had emerged as the top Defenseman in hockey.  Together, they had their boom period, where they led Detroit to the Stanley Cup in 1997 and 1998, with Yzerman winning the Conn Smythe as the playoff MVP in the '98 post-season.

As good as Yzerman had been, he had yet to be named a First Team All0Star, which as a Center in the Gretzky/Lemieux era was completely understandable.  This changed in 1999/2000 when he secured that honor, which was added by his first Frank J. Selke win as the game's top defensive forward. Two years later, the veteran took Detroit to another Stanley Cup win. Yzerman had a rough go the year after, as he had knee realignment surgery that caused him to miss the first 61 Games. At his age, a lesser man might not have come back at all, but Yzerman did, and the hockey writers recognized his perseverance by awarding him another trophy, the Bill Masterton.

When it was all said and done, Yzerman proved to be one of the best leaders in hockey, who played mistake-free hockey and was elite on both ends of the ice.  The renaissance of the Red Wings would never have happened without him.

Yzerman’s number was retired by the team in 2007, and he was inducted into the Hockey Hall of Fame in 2009.