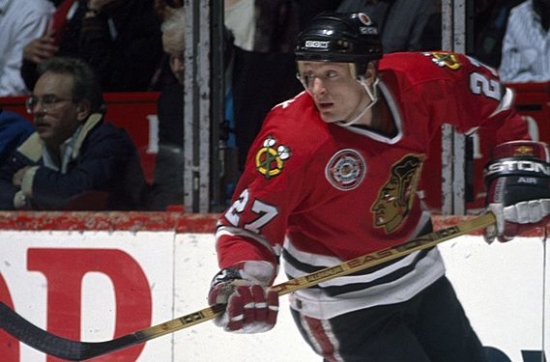 Jeremy Roenick made a claim as one of the greatest American born forwards in hockey history and luckily for the Chicago Blackhawks it was there where he was the most productive.

Roenick scored 596 Points of his 1,216 career tally with the Blackhawks.  He accomplished that in 524 Games, which gave him a 1.14 Points Per Game Average, which is good enough for second in franchise history behind Denis Savard.  The native of Boston, Massachusetts may not have been named to a post season All Star Team, but he was an NHL All Star in four consecutive seasons (1990-91 to 1993-94) and he was a 100 Pont scorer in the last three of those years.  In the 1991-92 season, he would lead the NHL in Game Winning Goals (13) and he would finish 5th in Hart Trophy voting.  He was 10th in 1003-94.

Roenick would continue his career with Phoenix, Philadelphia, Los Angeles and San Jose.