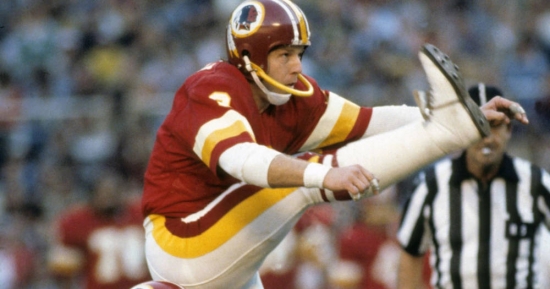 Mark Moseley’s rise to MVP has to be one of the most unlikely ones in NFL history…and not just because he is a Place Kicker.

Moseley was a 14thRound Pick in 1971 by Philadelphia, where he played 14 Games but as cut after his rookie year.  Next up were the Houston Oilers, but that too was a year before he was out of football, sending letters to teams looking for an opportunity. That came in 1974 with the Washington Redskins, and he would become the best Kicker in franchise history.

Moseley led the NFL in Field Goals made in 1976, 1977, and 1979, with a Pro Bowl Selection coming in the last of those years.  He would lead the NFL in that stat again in 1982, going 20 for 21 in that strike-shortened year.  Moseley was a Pro Bowl Selection again but also a First Team All-Pro.  With no clear-cut dominant player, Moseley was the surprise MVP by the AP.  The Redskins went on to win their first Super Bowl that year, and Moseley's accuracy in 1982 was a large component as to why.

He would play four more years With Washington and was released during the 1986 season.