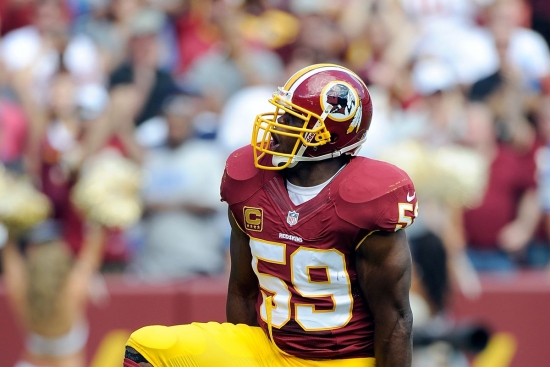 London Fletcher is one of the most durable players ever.  He is one of a few players who have played in 250 straight games, and he has a whopping 2,039 career Combined Tackles.  The last part of his career was with the Washington Redskins (2007-13), and it was easily the best part of his career.

Before the Interior Linebacker got to Washington, he made the St. Louis Rams roster as an Undrafted Free Agent from John Carroll. A year after he made the team, he was a starter on the Rams team that won the Super Bowl.  After four years as a Ram, Fletcher was a Buffalo Bill for five seasons, but again it was Washington where he shone the brightest.

In Fletcher’s first season as a Redskin, he had his second double-digit finish in Approximate Value, and he would do so again the next six seasons.  Fletcher made his first Pro Bowl in 2009 and did so again in the three seasons afterward. A Second Team All-Pro in 2011 and 2012, Fletcher led the NFL in Combined Tackles in '11 (166) and had 956 Tackles in the 112 Games he played in D.C..  Fletcher retired in 2013, and in addition to his tackling numbers, he also put up 11.5 Sacks and 12 Interceptions.