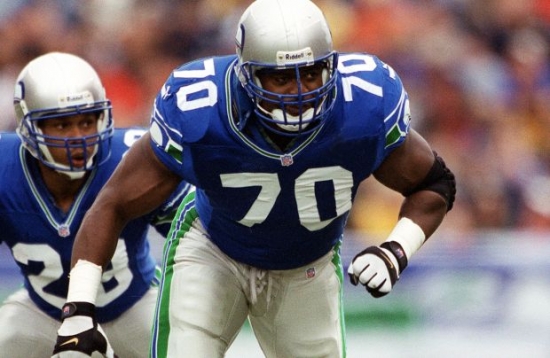 Michael Sinclair had a plodding start in the National Football League, as the sixth rounder from Eastern New Mexico did not see any action as a rookie in 1991.   From 1992 to 1994, he would play on pass-rush situations, but by 1995, he was playing in all defensive situations.

Sinclair would proceed to go to three consecutive Pro Bowls (1996-98), and he recorded at least a dozen sacks in all of those seasons.  The best of those years was 1998, where he led the NFL in Forced Fumbles (6) and Sacks (16.5), and he was a Second Team All-Pro.  The Defensive End played with the Seahawks until 2001 and had one final year in the NFL as a Philadelphia Eagle.

Sinclair had 73.5 Sacks with Seattle.