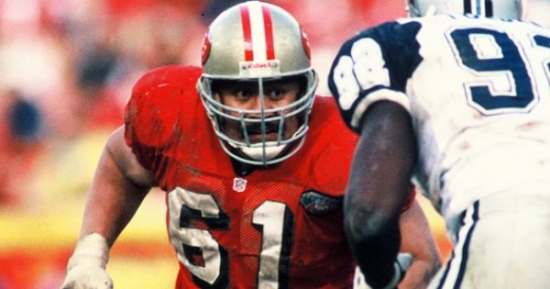 From Samoa, Jesse Sapolu played his college ball at Hawaii and was a late round (11th) pick by the San Francisco 49ers in 1983.

It was a slow start for Sapolu, who only had one start in his first three seasons, with the third year seeing Sapolu miss the season altogether due to injury.  Everything changed for Sapolu in 1987, where he was the Niners' starting Left Guard and would switch to Center in 1989, playing that position for five years, before going back to Left Guard in 1994.  Sapolu was a starter in three Super Bowl wins and had a fourth one as a backup early in his career.  He was also a two-time Pro Bowler, one in both of the positions that he played.

Following his retirement, Sapolu was integral in the foundation of the Polynesian Football Hall of Fame.