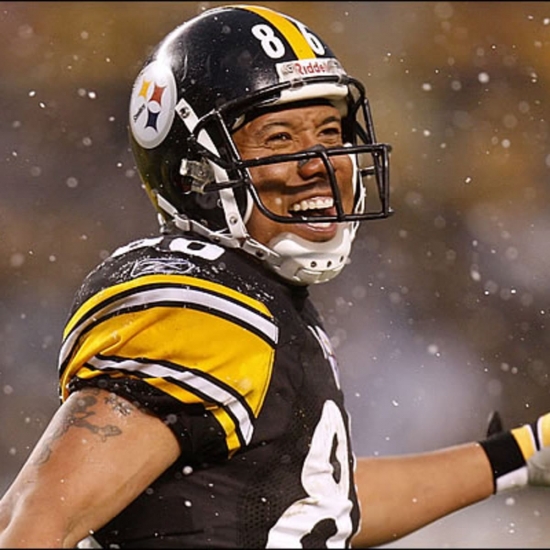 A member of the Pittsburgh Steelers for his entire career, Hines Ward is one of the most successful Wide Receivers in team history, and that says an awful lot!

Ward joined Pittsburgh as their 1998 Third Round Pick from Georgia, and the Steel City was the first and last place that Ward would play in.  Ward saw limited action as a rookie but would become a regular starter as a sophomore. It was in 2001 where Ward came into his own, and in that year and the three after, he was a Pro Bowler and a 1,000 Yard plus receiver.

After that streak ended, Ward was still an upper-tier player, and in Super Bowl XL, he was electric with 123 Yards and a Touchdown. Ward’s Pro Bowl days might have been behind him, but the Wide Receiver still had a lot to offer Pittsburgh.

Ward had two more years with at least 1,000 Receiving Yards, and he was again a large part of another Super Bowl win (XLIII).

Ward retired after the 2011 season, and as of this writing, he is the all-time franchise leader in Receiving Yards (12,083) and Receiving Touchdowns (85).  The Steelers would induct him into their Hall of Honor in 2019.