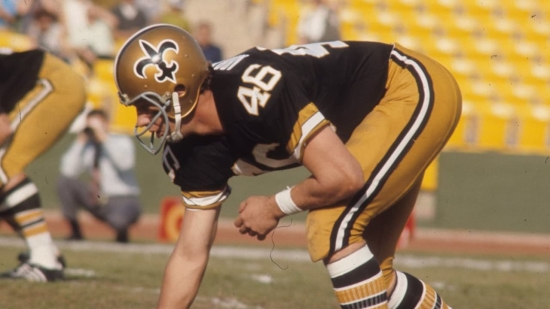 Xavier University wasn’t known for its football players, and even if you were the all-time school record holder in Receiving Yards, it does not get you a lot of attention.  Perhaps, that is why Danny Abramowicz, who held those honors as a Musketeer, went only in the 17thRound in 1967.

The New Orleans Saints were the team that chose him in their inaugural year of existence, and Abramowicz made the most of his opportunity. Listed as a Split End at first, Abramowicz blossomed into a full-blown Wide Receiver.

After a 721-Yard rookie year, Abramowicz increased to 890 in his second season, where he was seventh overall in Yards and was third in Receptions (54).  The native of Bellingham, Washington, had his best season in 1969, where he was named a First Team All-Pro, had 1,015 Yards, which was good enough for third overall. He also led the league in Receptions (73), making him the first Saint to earn that honor.

Abramowicz played two more full years with New Orleans and was traded to the 49ers during the 1972 season.  He would accumulate 4,875 Yards and 37 Touchdowns.