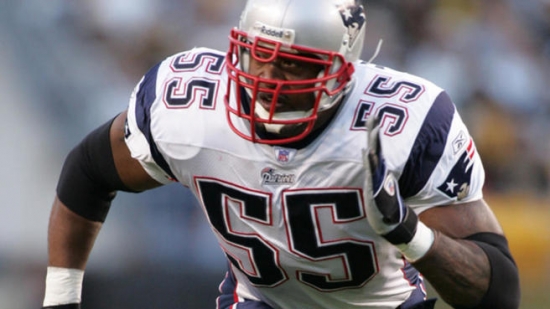 Willie McGinest was the Fourth Overall Pick in 1994, and when you are drafted that high, the pro club certainly hopes that you will have a long and fruitful career.  It is safe to say that the New England Patriots got that in McGinest.

McGinest was an All-Rookie as an Outside Linebacker, later moving to Defensive End, where he played the bulk of his career. The former USC Trojan became a cornerstone of the Patriots defense, and he would help them win three Super Bowls. Along the way, McGinest went to two Pro Bowls and netted 78 Sacks and 672 Tackles as a Patriot, the former placing him second all-time in franchise history.  His stint in New England ended in 2005 when he signed with the Cleveland Browns.

McGinest holds the record for the most playoff sacks with 16, all of which were accumulated as a Patriot.   In 2015, McGinest entered the Patriots Hall of Fame.