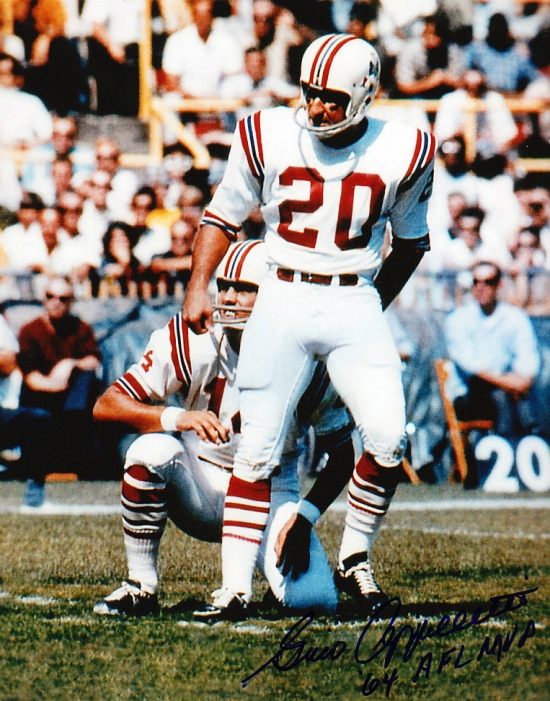 We don’t think that we are incorrect in stating that the most versatile player in Patriots history has to be Gino Cappelletti.

How could it be anyone else?

Before that designation was placed on Cappelletti, the former Minnesota Golden Gopher left school in 1955 and played semi-pro football in Canada before being drafted in the U.S. Military.  When he returned, he tried out for the CFL but never played a down there, and he went back to Semi-Pro.  The launch of the AFL gave Cappelletti another opportunity for the pros; he made the most of it and was an inaugural Boston Patriot.

Cappelletti was like a swiss army knife over his Patriots career.  He was used as a Kicker, Receiver, and Defensive Back, and no matter where he lined up, he was an effective weapon.  As a Kicker, he led the AFL in Field Goals three times, and he attempted at least 15 FG in all of his 11 pro campaigns.  Cappelletti became quite the receiver as he netted four 600 plus yard years. In 1964, both the AP and UPI named him the Player of the Year, and an incredible accomplishment for someone who was dead in the water in terms of his athletic career a half-decade prior.

Cappelletti was a five-time AFL All-Star, and he would play until 1971.  The five-time AFL leader in Points would have 176 Field Goals, 4 Interceptions, and 4,595 Yards from Scrimmage.  Cappelletti's number 20 was retired by the team, and in 1992, the Patriots fans elected him to their Hall of Fame.

What a crazy career!