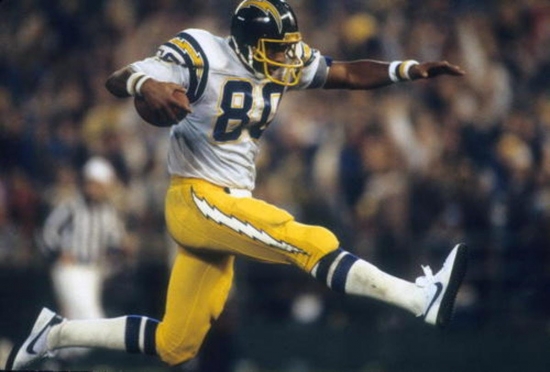 The San Diego Chargers used their First Round Pick in 1979 to obtain Kellen Winslow, a Tight End from Missouri.  Injuries held him to seven Games that year, but over the next four years, he was easily the best Tight End in the National Football League.

From 1980 to 1983, Winslow was named to the Pro Bowl and was a First Team All-Pro in the first three years of that window.  He exceeded 1,000 Receiving Yards in three of those seasons and would have had the fourth had it not been for the 1982 strike. Winslow was ahead of his time, as he set a single-season receiving record for Tight Ends (1,290 in 1980) that held until Rob Gronkowski broke it in 2011.  In San Diego, he will always be known for his playoff game against the Miami Dolphins in 1981 with a 166 Yard, one-touchdown performance, and a block of a Field Goal to send the game into overtime.  San Diego's Head Coach, Don Coryell, expertly used Winslow, lining him up in unique places, causing mismatches all over the field.

Injuries began to pile up in 1984, and following his last Pro Bowl year in 1987, knee problems caused him to retire.  The two-time leader in Receptions had 6,741 Yards for 45 Touchdowns, which were phenomenal stats for a Tight End of his day.

Winslow entered the Pro Football Hall of Fame in 1995, and he was also a member of the 75thAnniversary, 100thAnniversary, and 1980s All-Decade Team.  The Chargers also inducted Winslow to their franchise Hall in 1985.