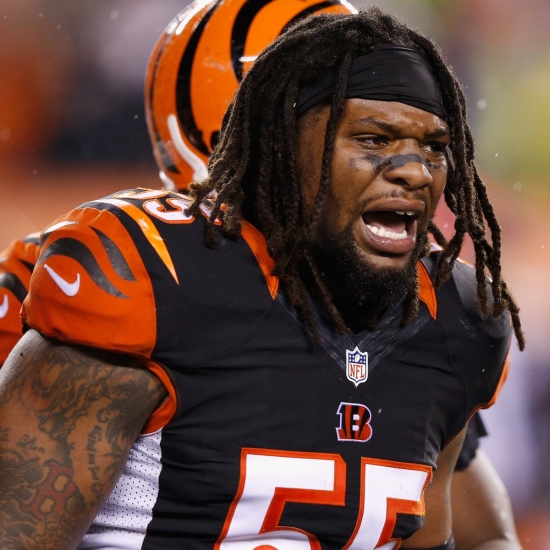 Vontaze Burfict was once tabbed as a First Round Pick when he was at Arizona State, but a poor attitude and an even weaker combine resulted in all 32 teams passing on the Linebacker in the 2012 Draft.  The Bengals signed him as an undrafted player, and that polarizing aura that he had as a Sun Devil followed him as a Bengal.

Burfict made the Bengals and was the starting Right Linebacker in the third game of his pro career.  He would record 127 Combined Tackles as a rookie, and in his second season, Burfict went to the Pro Bowl in a season where he led the NFL in Combined Tackles (171).  The first two seasons of Burfict's career were good, but the history of his poor temperament would rear its ugly head.

In 2014, a concussion cost him time, and he was fined continuously for illegal hits.  He appeared in more games in 2015 and had a good year, but he is mostly known for delivering a blow to Antonio Brown late in the AFC Wild Card Game when the Wide Receiver was considered defenseless.  An unsportsmanlike conduct penalty followed this penalty by Adam Jones, and the 30 combined yards led to a successful Field Goal attempt by the Steelers who won the game.

Burfict remained a dynamic linebacker for the Bengals over the next three seasons, but he never came close to a full season due to suspensions.  He was released after the 2018 Season.

While his career was riddled with controversies, when he was on, few Linebackers could touch him.  That, and his 604 Combined Tackles, earned him this spot.