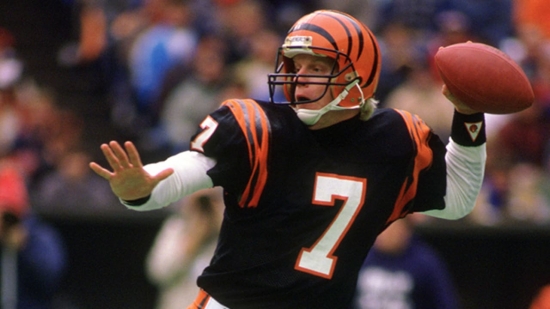 Ken Anderson was the Bengals Quarterback when the team drafted Boomer Esiason as his heir apparent.  Esiason was a star at Maryland, and despite being drafted as late as he was, the Terrapin was the first QB chosen in 1984.

Esiason started four games as a rookie, and he took over the following season.  The QB landed Pro Bowl honors in 1986, nearly throwing for 4,000 Yards and taking Cincinnati to ten wins.  1987 was a bad year for the Bengals, but they rebounded in ’88 winning the AP MVP and taking Cincinnati back to the Super Bowl.  Sadly, the result was the same, as the Bengals lost to the team that beat them the first time, the 49ers.

Overall, with the Bengals, Esiason threw for 27,149 Yards and 187 Touchdowns.