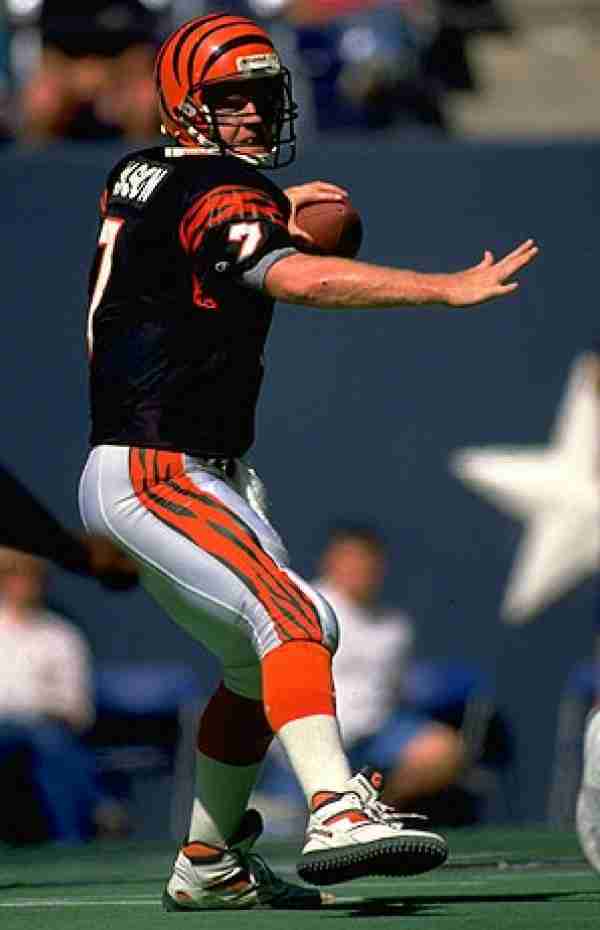 The hard-luck Cincinnati Bengals have yet to win a Super Bowl, but it was Boomer Esiason who brought them closer than anyone else had when they lost to the San Francisco 49ers on a last-minute drive in Super Bowl XXIII.  Fortunately for Esiason, his career did not need a Super Bowl Ring to be considered great.

Replacing the productive Ken Anderson, the powerful southpaw became one of the premier Quarterbacks in the league.  During his time in Cincinnati, Esiason was a consistent producer and he turned the Bengals into a high powered attack.  Mastering the play-action pass, Boomer used his strength and speed and was always producing high yardage games.


Boomer Esiason may be best known to younger football fans as a competent broadcaster, but he is still revered in Southern Ohio.  He may have done enough to at least get on the ballot one day, but in this age of the Quarterback, his all-time statistical rankings will likely plummet in the near future.

Boomer was terrible all game so deserves blame for them losing the game. Kelly I guess you can knock for later losses to Washington and Dallas, although the Bills were just much inferior to their opponents. He played alright in Super Bowl 25, definitely better than Boomer in SB 23, but their defense was awful at stopping 3rd downs. Forget wide right and look at how terrible Buffalo's defense was at stopping NY on 3rd downs. Buffalo would have been ahead if they weren't constantly letting NY convert on 3rd and long.
Quote
+2 #2 bengalfaninIN 2014-09-26 21:53
The thing about Esiason is this. If it's because he didn't win a super bowl you don't want him, then you're being thick headed. Both Boomer and Jim Kelly were within a single play of winning a Super Bowl, a play they had no part in that could have ended the game with a win for their team. That's why the 'rings are the reason' arguments end up being so silly sometimes. (Bengals DB dropped an interception in the end zone just before the game winning touchdown for the 49ers. Victory formation would have sealed the deal.)
You surely remember wide right? (Jim Kelly's Bills losing to the Giants on a missed FG attempt.)
Quote
-2 #1 P Smith 2012-12-25 16:49
Good, but not good enough or for long enough.

Putting Esiason in before Drew Bledsoe would be a joke.
Quote
Refresh comments list
RSS feed for comments to this post