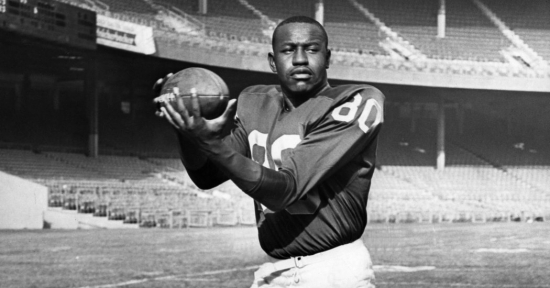 Art Powell played in the Canadian Football League for two seasons before he was drafted by the Philadelphia Eagles in 1959.  As an NFL rookie, Powell was used as a returner and defensive back but would join the New York Titans (later to be renamed the Jets) of the American Football League.  With the Titans, Powell would lead the AFL in Receiving Touchdowns (14) in the league's first year of existence, and in 1962 he would finish first in Receiving Yards (1,130).

He would join the Oakland Raiders, where he would stay for four years, and he was named an AFL All-Star in each of those campaigns.  In his first season there (1963), he would lead the AFL in Receiving Yards (1,304) and Touchdown Receptions (16) and was a First Team All-Pro.  Powell also exceeded his yardage in 1964 (1,361) and again had a four-digit output in yardage in 1966 (1,026).  He would also never have less than 11 TDs in a season as a Raider.  Powell finished his career with one season each in Buffalo and Minnesota.

Powell would accumulate 8,046 Receiving Yards and 81 Touchdowns over his 177 Game career in American Football.

Should Art Powell be in the Hall of Fame?