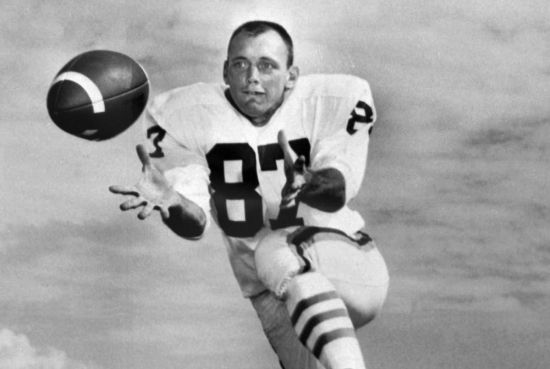 Charley Hennigan went undrafted in both in the NFL and AFL, but the Houston Oilers of the latter gave him a chance, and aren't they glad they did!

The Wide Receiver managed 722 Yards as a rookie, and he is credited with scoring the first TD in Oilers history.  He was a large part of Houston getting to the AFL Championship and subsequently winning it as he caught four passes for 71 Yards.  He wasn't going to sneak up anyone in 1961, but it didn't matter as he was unstoppable leading the AFL in Receiving Yards and Yards from Scrimmage (1,746) and was so dominant in the month of October that he had 822 Yards, a record that stood for 34 years!  He set (and will forever hold) the single game Receiving Yard Game with 272 Yards.  The Oilers won their second AFL Title, which never happens without Hennigan.

Hennigan, who was an All-Star and First Team All-Pro in 1961, was an All-Star again perennially until 1965.  He would win his second First Team All-Pro in 1964, a season in which he would once again lead the AFL in Receiving Yards and Yards from Scrimmage.  After a steep decline, he retired after the 1966 season, but his dominance in the first half of the 1960s should never be forgotten.  We know that we won't.

Should Charlie Hennigan be in the Hall of Fame?