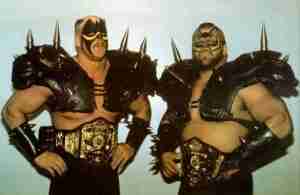 The Road Warriors were not just a tag team; they were a force of nature.  With their painted faces, spiked shoulder pads, strange haircuts and cerebral manager (Paul Ellering) they created a new style of power wrestling in the 80’s.  They didn’t just beat their opponents, they destroyed them.  When they won their first recognized world title in the AWA over the near sixty year old Crusher and forty four year old Baron Von Raschke they showed the wrestling world what the future was going to look like.
Subscribe to this RSS feed