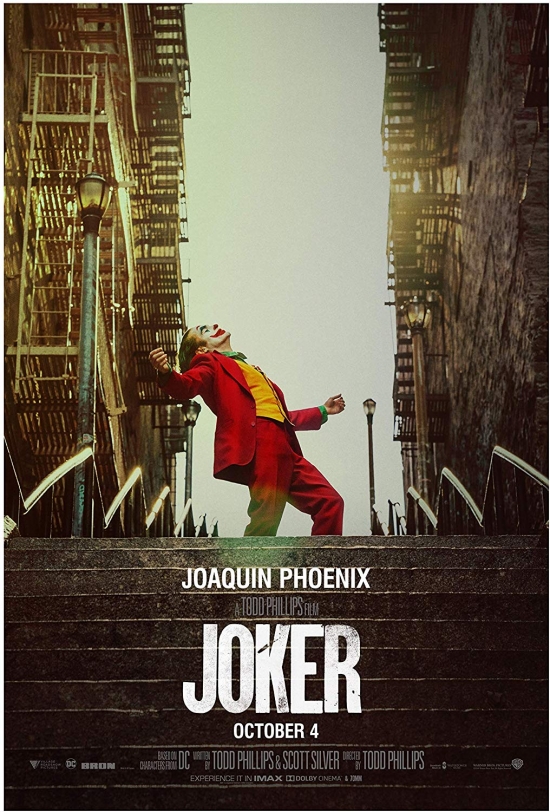 Well it has been a few weeks since I made a contribution to “Was I Entertained”. This was due to a much needed vacation to Mexico where my wife and I needed to escape the snow and doldrums of Ottawa’s winter. As we were in a resort, there was not much tv or movie watching happening as the Tequila sunrises were calling my name. However, that is not to say that we did not get a chance to catch a few films on the flight down. With this in mind, I accessed the on-board entertainment to see what they had in their usually very limited library. Much to my surprise, I came across the latest version of “Joker” starring Joaquin Phoenix. As we watched the Oscar’s the night before our departure, and knowing that he won for best actor in a leading role, I was eager to start the film.

Now as this was a discount airline, I was limited to watching the film on my I-Pad, so I could not get the full effect of this film compared to watching it in a theatre or even on my own big screen tv at home. However, even with turbulence, letting other passengers go to the washroom (I was in the aisle seat), ordering more scotches and basically getting bumped every time the stewardess walked by (or is it flight attendant now, I can never keep track of which title is most politically correct), I thoroughly enjoyed the film!

Before any analysis or discussion on the merits of this film, we will provide a quick synopsis of the plot. What is Joker about, well, unless you have had your head in the sand over the last few decades, and especially last year, Joker is the “origin” movie of one of Batman’s principal adversaries. This version staring Phoenix, started out with Fleck/Joker trying to eke out a living in Gotham as a “rent a clown”. This dismal occupation has poor Fleck going from gig to gig, trying to get people to laugh, taking care of his ailing mother and trying and I mean trying to become a stand up comic. For all intents and purposes he fails at everything! In the early stages of the film, we discover that Fleck/Joker (Phoenix) has a mental disorder that makes him laugh at anything and everything, even at the most inopportune moments. While his livelihood is steadily declining, he escapes into a dream life where he is extremely funny, has an affair with a young lady down the hall, is the illegitimate love child of Thomas Wayne, and is a great stand-up comedian. Everything he has dreamed about has come true, right? Not exactly, he soon discovers that this all a fantasy in his mind, he is insane, his mother is mentally disturbed, he is not the son of Wayne and his actions in a subway have triggered a city-wide rebellion against the “establishment”. The “establishment” if you will, also includes Thomas Wayne (father of Bruce Wayne/Batman) who is running for Mayor and calls out all the protesters for what they are.

Concurrently, Fleck/Joker (Phoenix) is trying his hand at stand-up, fails horribly but gets noticed by his tv hero Murray Franklin (De Niro) who has a nightly variety show. Franklin (De Niro) invites Fleck/Joker (Phoenix) on his show and sets of a series of events that ultimately creates the Joker. In a nutshell, that is the plot, without giving away too many things, especially if you are one of the 5 people who have not seen this film yet.

At this time, lets look at the film itself. It was dark, gritty, and told a tale of origin that has not been told before. Gotham was represented as a city in turmoil; rampant un-employment, corruption, dismal conditions….basically a city in ruin. The film clearly portrays this and sets the tone for the anti-hero’s creation. The casting of all characters was spot on, even fellow “clowns” from the agency portrayed a bunch of people down on their luck. The yuppies and successful people vs the downtrodden were clearly articulated, and you, the audience were rooting for the anti-hero, the ultimate antagonist to be created. To me, the scene that best portrays it, is when Fleck/Joker (Phoenix) kills the 3 drunken yuppies on the subway. The yuppies were real Ass-H&^3s and the audience did not feel remorse when they were taken out. These guys while innocent of a crime, they were guilty of lacking in human empathy, especially the way that they picked on all the other passengers in the car, including Fleck/Joker. The mood of the film was dark and pained, as was the script, the scenery and all the characters involved. Extremely well done!

The cast was also amazing. Joaquin Phoenix was phenomenal! I always like his portrayals and movies, especially in Gladiator and Walk the Line. Some of his other films have garnered critical acclaim, but were stories that were not exactly what I would be interested in. However, in Joker, Phoenix made the character even more insane and maniacal then Heath Ledger did. (Ledger also played a fantastic rendition of the Joker, and I am hard pressed to say which version I like more). Both were fantastic and were very deserving of their Oscar nominations and wins. They were far superior to Jared Leto’s version in “Suicide Squad”. Jack Nicholson, also did extremely well in his version and stole all the scenes that he was in, but even this legendary icon could not compare to the depth and scope of Phoenix in this role. He has truly taken this character to a new level, and I am looking forward to the upcoming sequel and how he will develop this character further.

Robert De Niro as Murray Franklin: For those who have read some of my previous reviews, you know that I am big fan of De Niro. I am hard pressed to find a movie that he did that was bad.  Hell I even found his role in “Dirty Grandpa” funny, even if the rest of the movie was extremely lame. His portrayal of a late night host was excellent. His jokes and one liners, somewhat reminiscent of his role in “The Kings of Comedy” were well delivered, and as always, he captivates the audience when he is on the scene, truly one of the greatest and most diverse actors of his generation.

Zazie Beetz as Sophie Drumond: As the neighbour and imaginary love interest of Fleck/Joker, she was more of a supporting role here. Not much screen time, but still well delivered. I enjoyed her character in Deadpool 2 (Domino) far more.

Frances Conroy as Penny Peck: Penny as the mother to Arthur Fleck/Joker (Phoenix) played an instrumental role in this film. Her portrayal of the sick mother was believable, and you could see that she did not have a great grasp on reality. Her obsession with Thomas Wayne (Cullen) and delusions set the stage for her son’s illness. As we dig deeper into her past and how she raised her son, it demonstrated how Arthur Fleck/Joker (Phoenix) grew up to be the man he was. She plays this type of role well, as I remember seeing her In American Horror story, and many of the characters she played there are similar to this.

Brett Cullen (Thomas Wayne), Shea Whigham (Det Burke) and Bill Camp (Det Garrity) round out the remainder of the supporting actors. They all did well, and added to the story line as required. What I found extremely interesting was that this was the first time that Thomas Wayne (Cullen) was portrayed as a bit of a rich jerk. In all other movies that dealt with Batman’s past, he was always portrayed in loving memories, with no malice or arrogance portrayed. This version of Thomas Wayne was interesting as it made him out to be a pretty savvy and ruthless businessman…and aspiring politician. Come on…when have ever had an honest politician and if that was the way he was aspiring to go…then he must not have been that great then eh?

Overall this was a fantastic film, I really enjoyed it, as I mentioned at the start, even on an airplane watching on my I-Pad, I found that this movie was great. I will watch it again on my own big screen tv to get the full effect, and I am sure that I will enjoy it even more. Was I entertained and would I recommend this movie, Hell yes! It has taken the character on a whole new path, and I look forward to seeing where this will finally end up!

If you are interested in further films from the main actors, please consider the following: