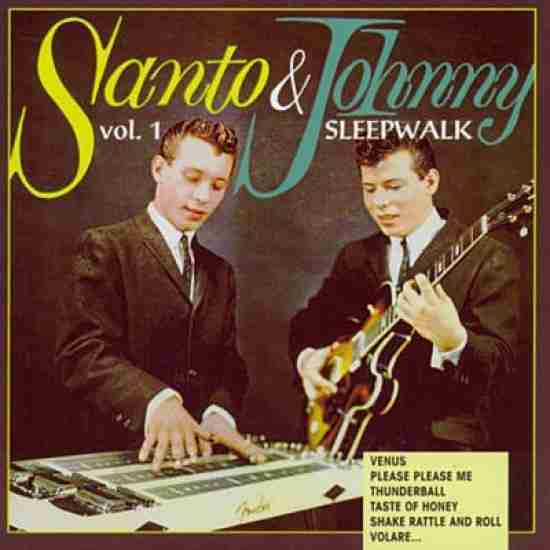 
As much as I try to convince myself (and occasionally others) that I am a worldly individual, I have been known to make a few cultural faux pas, such as I did presuming for years that Santo & Johnny were Hispanic.

I am trying to decipher why I thought that as I don’t know anyone with a first name Santo, and I don’t think that former Chicago Cub, Ron Santo was of Latin descent at all.  Was it because it played at the end of La Bamba maybe?  Was it because that the most famous Santo is Santo Domingo in the Dominican Republic where they speak Spanish?  Maybe it was just that I was too lazy for years to bother to research their origin, which is even more evident since it was the Portuguese who founded Santo Domingo.

Since I feel a little strange blaming Lou Diamond Phillips for my mistake, so I will opt for laziness.[1]

Santo & Johnny Farina were Italian American brothers from Brooklyn, New York who were steel guitar virtuosos who adopted the instrument as it was a favorite of their military father who heard that often on country music stations.[2]  Adding again to my geographic misappropriation, the steel guitar originated in Hawaii.

The Farina brothers would sign with a local label (Trinity Records) and “Sleep Walk” was released, which would gain traction in the Northeast and work its way across the country slowly selling records and making a steady climb to the top position.  It was a gorgeous song, with a hypnotic melody that you could interpret as romantic or melancholy, a rare accomplishment for an instrumental song.

Now you remember what I said about instrumentals right?  Although, Santo & Johnny would still have five more songs chart the Hot 100, none of them cracked the top fifteen and after a year they were effectively done from being a real player on the music scene.[3]  “Sleep Walk” however would remain once of the most enduring songs of 1959 and has been used in multiple movies, television shows and commercials and is an oft-covered song for most people who ever picked up a guitar.

As for Santo & Johnny they would continue to release records though would be listened to by less and less people and would disband in 1976, with Santo continuing on.  For what its worth, in 2002 they entered the Steel Guitar Hall of Fame and no I will not be adding a section on my Notinhalloffame.com website on those who are not in that particular Hall and should be.

[1] I do blame him for sub-par acting and sticking around past 1989.
[2] I know I am perpetuating stereotypes here but most of the Italian Americans and Italian Canadians that I have been around are a little on the loud side and “Sleep Walk” is so subdued.  I just made things worse didn’t it?
[3] The highest they got was with Tear Drop, a more country influenced song that went to #17.
Tagged under
Tweet