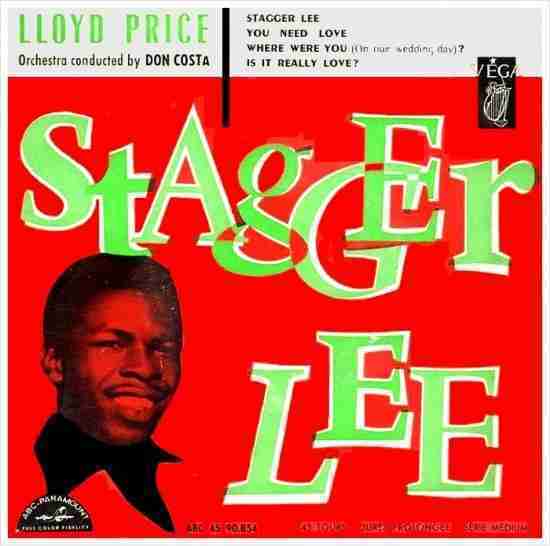 Many a Hip-Hop song talks about pimps and the life of being a gangster, and yes, there have been a few that have gone number one.  Lloyd Price accomplished that decades earlier about a man who really was an “original gangster”.

“Stagger Lee” was originally a folk song written in the late 1890’s about a St. Louis man named Lee Shelton, who was sometimes nicknamed “stag” or “stack depending on who you asked.  The story was that Shelton was a known gambler and pimp and belonged to a group of pimps in St. Louis named the Macks, and like the definition of a “mack” today, the group took great pride in their appearance, were oozing confidence and were kings of the street.

The story goes that Shelton got into a skirmish at a saloon with a man named Billy Lyons after a night of drinking.  Lyons grabbed Shelton’s hat and after refusing to give it back, was met with a bullet to the abdomen.  After shooting Lyons, he calmly walked to his fallen opponent picked up his hat and walked away. When you think about it how many times have you seen something like that played out on movies or television.  It is a powerful image and you subconsciously can’t help but be magnetized by the character that does this, so it is very logical that songs would emerge about a story such as this one.

Shelton would be convicted in 1897 and sent to jail, but a legend was born and he would become almost an anti-hero of sorts to the black community and myths surrounding him grew.[1]  This wasn’t just about a pimp anymore.  “Stagger” Lee was about being a student of the streets, looking cool, and not taking shit from anybody.[2]

While the actual origin of the song “Stagger Lee” is a little ambiguous, the first successful recording (then titled Stack-O-Lee) was done in 1923 by a group called Waring’s Pennsylvanians and there would be later versions done by Cab Calloway, Duke Ellington and Woody Guthrie, but it would be Lloyd Price who would put his official stamp on the song and its success brought him the mainstream audience that he really hadn’t obtained before.

In the early 1950’s, Lloyd Price already established himself as a major star in the R&B world, channeling his born and bred New Orleans sound into hits, such as “Lawdy Miss Clawdy”, which went to the top of the R&B Chart, but did not go to any mainstream chart.  Price had four more top ten hits on the R&B Chart all of which again did not go to the regular Pop Chart but in the middle of his momentum, he was drafted and had to serve in Korea in 1954.[3]

Price would return to the States a few years later but the landscape changed so much while he was gone.  Little Richard basically took his place as the premier African-American R&B star and in some circles was the inventor of Rock and Roll, a spot that easily could have been Price’s had he not been drafted, but he was able to forge a return and this time appeal to a much broader audience, which was where his adaptation of Stagger Lee comes in.

He would take the old folk song that hadn’t really been a hit in the 1950’s and combine his Crescent City roots with the new Rock era.  It was a major success going to the top on both the R&B and Hot 100 and now with television in the equation, Price was a bigger star than he had been in 1952.[4]

Price would strike gold again with “Personality”, which would be his signature song (he even started referring to himself as “Mr. Personality”) and I erroneously thought that this was the Price song that went to number one on the Hot 100.[5]  It didn’t, as it went to number two  (though number one on the R&B Chart), but it marked a significant change in his musical direction, incorporating more horns and embracing more of a pop sensibility.

This would be the apex of Lloyd Price’s career and though he would continue to have multiple hits after, by 1965 he would no longer make the Hot 100, but he would develop his own small labels, one of which gave Wilson Pickett his start.  As his star would continue to fade, his business savvy kept him going as in addition to nightclubs he owned, he would also famously collaborate with Don King in promoting some of his early fights, which included the “Rumble in the Jungle” between Muhammad Ali and George Foreman and much later would start his own Southern food line.[6]

[1] Myths include that he sold his soul to the devil for that magical hat (hence why he resorted to shooting a man when it was taken), that he could transform himself into an animal and that he had a duel with Jesse James.
[2] Three Six Mafia was right…it really is hard out there for a pimp!
[3] Those other hits were “Oooh-Oooh-Oooh”, “Restless Heart”  “Ain’t It A Shame” and “Tell Me Pretty Baby”.
[4] He would have to tone down the lyrics for many television appearances though.
[5] As a kid I remember it being used for a Cheez Whiz commercial.  Apparently Cheez Whiz has “personality”…and all this time I though it was just processed crap!
[6] King needed Price at the time as he was already friends with Ali.  As for the King/Price relationship it apparently ended the same way that all of Don King’s friendships end.
Tagged under
Tweet