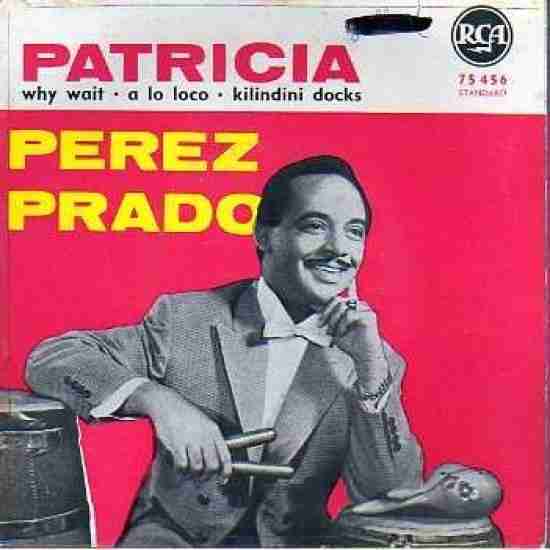 
How perfect in an anthology about pop culture that my first exposure to our next song is from a bad version by Homer Simpson when getting ready for an intimate encounter with Marge? Homer may have sung it badly but Perez Prado never sang it all, as the version that went to the top was eschewed by the lyrics written by another.[1]

1958 was a time when Americans freely visited Cuba. Artists like the Champs and Ritchie Valens showcased the Mexican influence in Rock and Roll, but the Cuban sound is vastly different.[2] As most Cubans and Mexicans will tell you, other than warm climate and the Spanish language they don’t consider themselves to be similar at all, and that is certainly accurate musically.

The time for bandleaders and the top forty were seeing the end come near, but Perez Prado, the “King of the Mambo” had something to say before they left the charts. Prado, and his Cuban style may have broke the ethnic rule that it was harder to get to number one, but Cuba and Mexico’s proximity to the United States made it hard to ignore and there was a certain adoption of the cultures, albeit marginally in the U.S., and it was something they were ready to accept in small doses.

This isn’t an exaggeration as “I Love Lucy” may have been one of the most successful shows in the 50’s, but there was a segment of the American population that was not thrilled with the interracial coupling of Lucille Ball and Desi Arnaz, and that includes some of the people who watched it!

Going back to Prado, this instrumental fit the mold of those that could go the top at the time. It had the hook, it was fun and it was accessible to all ethnicities. As for Prado in recent years, he would receive a renaissance of sorts when Lou Bega covered “Mambo No. 5” and many people were looking to hear the original. Hispanic music, whatever its form would prove that it was going to stay in the United States and year by year it would get stronger and more prevalent.

That is a trend that will continue in America for decades to come, and for many there is nothing more “American” than that.

[1] I didn’t make that up. Here is Homer:
[2] In case you are wondering, Valens never went to number one. “Donna” was his highest charting single at #2, and “La Bamba” went to #21.
Tagged under
Tweet